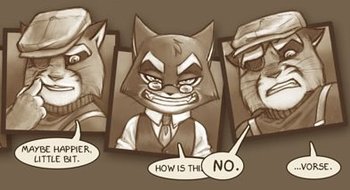 Linton: At least he's smiling.
Lottie: That's not a smile. That's the face you get when somebody says "cheese"...then takes two minutes to work out how to use the camera. That hurts.
— Bad Machinery
Advertisement:

Technically a Smile is when the narration (or narrator, in the case of first-person) notes that the mere fact of baring one's teeth doesn't necessarily make a "smile", in the sense of an expression designed to convey friendliness, happiness or harmlessness.

Humans are one of the few creatures to bare their teeth as anything other than a threat; this trope comes into play during those times when a "smile" conveys something more... animalistic. Look for the phrase "didn't reach their eyes" to appear.

Obviously, this is far more common in print media. In comics, film and TV, the expression doesn't have to be described because the audience can see it right there.

This is probably the trope that inspired a classic series of humorous posters a few decades back (often seen in libraries and such) showing scowling animals, each one with the caption "I am smiling."