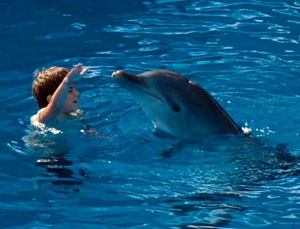 "Did you know dolphins need to be in a pool with other dolphins? It's a law, because they're so social... like us... or me, anyway."
— Hazel, Dolphin Tale
Advertisement:

In most media, especially most fiction, dolphins are portrayed as playful creatures, who will easily befriend humans and like to play around in the water with them.

In real life, the extent of this varies. Tame dolphins are usually trained to be like this, and stories of friendly behaviour by wild dolphins abound and predate dolphin training. However, random wild dolphins are often as hard to predict as a random human stranger, and like any other animal, they can be dangerous. Experts recommend keeping your distance from them.

Sometimes overlaps with Heroic Dolphin, or Sapient Cetaceans, or both. Compare Sweet Seal, Playful Otter, and Warm-Hearted Walrus for other friendly sea mammals.

(Note: Technically they're beluga whale, but close enough) Kimulo and Matt really want people to swim with them. Preferably naked.

(Note: Technically they're beluga whale, but close enough) Kimulo and Matt really want people to swim with them. Preferably naked.