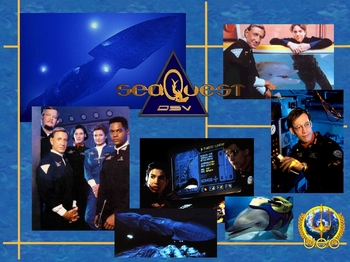 Star Trek under the sea!
"The twenty-first century — mankind has colonized the last unexplored region on earth, the ocean. As captain of the SeaQuest and its crew, we are its guardians, for beneath the surface lies the future."
—Opening Narration
Advertisement:

SeaQuest DSV was a groundbreaking show set initially in 2018. It first aired on NBC in 1993 with Roy Scheider as Captain Nathan Bridger and Jonathan Brandis as Lucas Wolenczak. The show received significant retools at the beginning of each season, including numerous cast rotations. Scheider left after the second season and was replaced by Michael Ironside as Captain Oliver Hudson. The show was then renamed SeaQuest 2032 as the second season finale set up the characters to be thrust ten years into the future. The third season performed abysmally, and the show was canceled.

SeaQuest was essentially a wet Space Opera, and its stories and characters would be equally at home on the Enterprise or Serenity as under the ocean, save for Darwin of course. As the flagship of the UEO (like the UN, but wet), SeaQuest and her crew had dual roles as a military powerhouse and research/exploration vessel. She could dive deeper, move faster, and hit harder than anything else on or under the sea. The design of the boat was revolutionary, not only as a fictional vessel, but as a set and special effect. The interior sets struck a balance between cold functionality and whimsy, the latter provided by the transparent swim tubes (or hydropressure system, to series scholars). These allowed the boats's dolphin crew mate, Darwin, to enter any part of the boat, from the bridge to the launch bays and back. Darwin was provided with speech by an advanced computer system developed by the boat's Teen Genius.

SeaQuest was one of the first TV series to supplant motion-control cameras and physical models with CGI.

SeaQuest was produced by Steven Spielberg, David J. Burke, and Rockne S. O'Bannon, who later went on to create Farscape.

Not to be confused with Sealab 2020, which SeaQuest (intentionally or unintentionally) drew a couple broad ideas from.