This is the story of two pinball video games, three computers, and a custom controller... 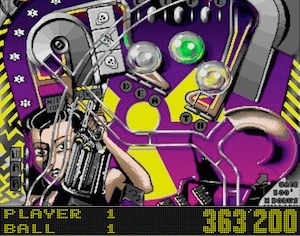 There is a Point Beyond Addiction...
Advertisement:

The story begins in 1994 with Obsession Pinball (also known as Obsession), a pinball video game for the Commodore Amiga and Atari STe, and the first title from the small Swedish firm Unique Development Studios (UDS). Published by 21st Century Entertainment, it came with four tables:

The game was clearly inspired by other pinball video games of the time, particularly Pinball Dreams (also published by 21st Century Entertainment). Although UDS was a fledging company, Obsession quickly garnered praise for the game's realistic physics and fast action, and the game became a best-seller among European Atari and Amiga owners. 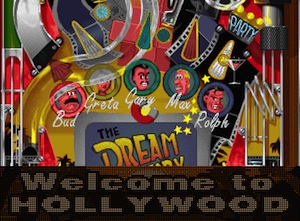 Two years later, the popularity of Obsession prompted UDS to set their sights on the PC world, and Absolute Pinball was released in 1996 by 21st Century Entertainment for the IBM Personal Computer.

Absolute Pinball was a Polished Port of Obsession, with improved graphics, remixed theme music, tweaks to the physics engine, and the addition of several video modes to the tables. Furthermore, Absolute had improved screen resolution support; setting the game into High Res mode would allow viewing more of the table with letterboxing, while "VESA Flip" handled rotating monitors by displaying the entire table sideways. In a more substantive change, the "X-ile Zone" table was replaced with "The Dream Factory," centered on Hollywood stardom.

Although Absolute's gameplay was nearly identical to those of Obsession, the lateness of the port hurt it; Absolute looked dated compared to the three-dimensional graphics of other digital pinball games of the time, particularly Pro Pinball and 3-D Ultra Pinball. 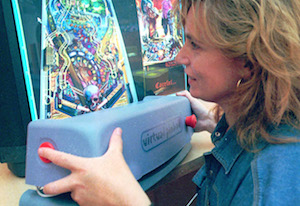 See Me, Feel Me, TILT Me! note
Shown here with Full Tilt! Pinball

Attempting to cash in on the nascent audience for PC pinball games, in 1997 Philips introduced the Virtual Pinball computer peripheral. This was a full-sized plastic replica of the front of a pinball table, with two flipper buttons and a spring-operated launcher.

By connecting the controller to the computer's PS2 port, it would send various keystrokes to the PC, and a set of DIP switches on the back changed the keystroke mappings. Dedicated players could even mount it to a fixed surface, then "nudge" the pinball game by shaking the controller left, right, or forward.

A copy of Absolute Pinball was included with the controller, though it's fairly easy to make it work with any other computer pinball gamenote unless the game needed additional keystrokes. Older controllers can be found occasionally for sale online, but die-hard pinheads feel it's more trouble than it's worth.