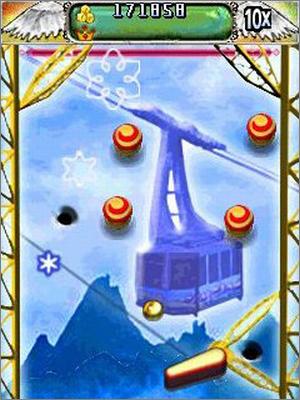 Hope you're not afraid of heights...
Advertisement:

Mile High Pinball is a video pinball game for the Nokia N-Gage, developed by IdeaWorks3D and released in November 2005.

Unlike most pinball games, the object of Mile High Pinball is to advance to the top of a stack of over 80 table by flipping the ball higher and higher. Each themed table has an objective that must be met before the player can go up to the next table, while draining a ball merely drops the player back down to the previous level. The player can also find hidden doors leading to secret levels, collect money to purchase various Power Ups, or sell them back for money to get other stuff. Players' scores were tracked on the N-Gage Arena, along with online two-player simultaneous play, and a "Try My Board" feature allowed players to rearrange the tables and then post them for others.