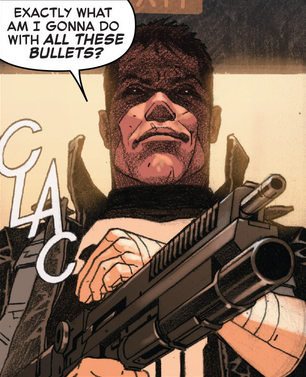 Something fun, I bet.
"Now doesn't that just torque your jaws? I love that. You know like in the movies, just as the good guy is about to kill the bad guy, he cocks his gun. Now why didn't he have it cocked? Because that sound is scary. It's cool, isn't it?"
— The Caller

AKA: The international sound of "You in a whole heap of trouble, son."

The dramatic gun cock is employed when a character is up to some interrogation work while holding a gun to someone's head. The subject of the investigation is invited to divulge some critical information. The subject refuses or spouts an insult.

Here comes the dramatic gun cock. The interrogator pulls back the hammer of the revolver or pistol, or racks the slide if the pistol has no hammer, then resumes pointing the gun to the subject's head. Usually, this is enough to thoroughly spook the subject into full disclosure. A pump-action shotgun may also be used for this purpose, sometimes with a One-Handed Shotgun Pump, albeit it's overall not as popular as doing it with a handgun - even more rare is racking the bolt of a fully automatic weapon. A bolt-action rifle may have a character dramatically work the bolt. Sci-fi settings with guns that don't use bullets may substitute a charging capacitor's whine, or use a cocking sound anyways.

In other situations, the dramatic gun cock serves to announce a character's presence, or (especially when taking place off-camera) to indicate that the tables have turned in some way. This is a *Click* Hello, and often occurs in conjunction with a My Name Is Inigo Montoya moment.

The sound effect is often added in by sound editors after filming. This can be especially noticeable when the character onscreen is using a gun that cannot be manually cocked. Examples include the Luger and the Glock.

The dramatic gun cock may be accompanied by a Pistol-Whipping. Subtrope of Kinetic Clicking. Can sometimes lead to Guns Do Not Work That Way when a (semi-)automatic gun that has already been shown to be actioned recently is cycled again for emphasis, without a round being ejected. Also compare with Noisy Guns which includes many more mechanical noises from guns too, for no reason. Compare High-Altitude Interrogation, which also relies on getting information through death threats. Has nothing to do with a particularly dramatic Phallic Weapon, but it can overlap.

In Mafia II's version of Tommy Angelo's death, Joe Barbaro loudly cocks his shotgun just before blasting the ex-Mafioso in the chest.

In Mafia II's version of Tommy Angelo's death, Joe Barbaro loudly cocks his shotgun just before blasting the ex-Mafioso in the chest.