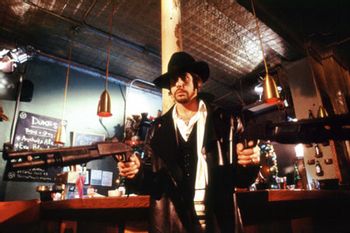 The Hebrew Hammer is a 2003 "Jewsploitation'' comedy film, written and directed by Jonathan Kesselman.

Damien (Andy Dick), the evil son of Santa Claus, murders his father to continue his grandfather's (the previous Santa Claus, seen in the prologue) scheme to eliminate all December holidays save Christmas. When the Jewish Justice League gets wind of this fiendish plot, they start looking for one of their own to fight for their right to light their menorahs. The JJL Chief, Bloominbergensteinanthal (Peter Coyote), reluctantly agrees that their one hope is the one hebe too radical even for them: Mordechai Jefferson Carver (Adam Goldberg), the Hebrew Hammer.

The Chief's daughter, Esther (Judy Greer), convinces the Hammer to take up the cause. What follows is a hilarious walk through Jewish culture, playing with Jewish stereotypes, and saving Hanukkah for everyone.

A sequel is in the early planning stages

, in which "the baddest Heeb this side of Tel Aviv" is to face off with no less than Adolf Hitler.

Not to be confused with the other Hebrew Hammer