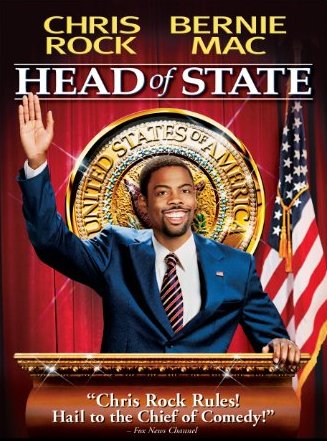 The only thing white is the house.
Advertisement:

A 2003 comedy film about a U.S. presidential election written by, directed by, and starring Chris Rock.

The (non-specific) party's candidates for President and Vice-President were killed when their planes crashed into each other. Senator Bill Arnot (James Rebhorn) — believing they have no chance of winning since the other party's candidate is unbeatable, having been Vice-President for eight years, a veteran of The Vietnam War, and Sharon Stone's cousin — decides to set his party up as next election's favorite by putting Mays Gilliam (Rock), a black alderman of the 9th Ward in Washington D.C., on the ticket.

The idea is that Mays will garner the party goodwill among the minority voters of America, so that when the next election comes they will be predisposed to vote for whoever the party has nominated, which Arnot plans to be himself. Unfortunately, once Mays—at the urging of his older brother and eventual running mate Mitch (Bernie Mac)—decides to run things his way, he does too well. So well that it looks like he has a legitimate chance of winning, and even if he fails, he will do well enough to be nominated again for the next election instead of Arnot.

Much of what follows is Arnot trying to undermine Mays while presidential favorite Brian Lewis (Nick Searcy) underestimates Mays to the very end.