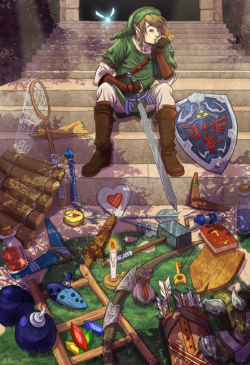 Pockets that're Bigger on the Inside? Multiple hearts? Companions? Time travel? Aha! Link's a Time Lord! note  and he has a scarf, too!
"You don't have a backpack. What you have there is an invisible leather TARDIS."
— Gimli, DM of the Rings
Advertisement:

Video game characters, particularly in Adventure Games and First Person Shooters, have the seemingly superhuman ability to carry incredible amounts of stuff with them at one time, usually an array of weapons along with the ammunition for each one. It doesn't limit their ability to run and jump and crawl through small spaces at all. What's more, when you see them during cutscenes in first-person games and third-person games, you can't see where they've stowed these things, even when they're wearing clothes that are more or less form-fitting. It seems they've put them away in the same realm where Hyperspace Mallets are kept.

In practice, a Hyperspace Arsenal serves to reduce the more annoying aspects of inventory management, removing the need to constantly shuffle stuff in and out of your backpack. Some games may choose to restrict inventory for balance reasons: It might upset the difficulty curve if the protagonist can carry around an infinite amount of healing items. This can be more realistic as in Halo's rule of no more than two weapons at once or still kind of exaggerated, as in many Adventure Games' "you can only carry twelve items"-type ruling. The result, more often than not, is the more annoying variety of Inventory Management Puzzle (and often leading to its own ridiculous situations — bazookas regularly take up as much space as gum wrappers, and in weapon-limited First Person Shooters you might be able to carry around a rocket launcher and a heavy machine gun, but lord forbid you try to carry around three pistols).

In fandom, this trope is often "justified" with the supposition that the Hyperspace Inventory is actually kept in the character's pants (which actually serves to answer exactly none of the objections to the trope). Some less-than-serious works, such as Space Quest, Simon the Sorcerer or Monkey Island, take this very literally.

The reverse occurs in many text adventures, where (primarily for design reasons) the player character could only carry a specific number of items (often five) at any one same time. Regardless of how large these items are.

One odd effect of the Hyperspace Arsenal is that characters may struggle to support an item that they have "taken out" or "equipped," and they may not be able to wear something at all if they're not strong enough — yet presumably they're carrying this very item around all the time. Put another way, as long as you can't see it, it weighs nothing. (This could mean that the equipment is too heavy to be feasible in battle, though, again, this doesn't explain how you're lugging around a suit of full plate armor you're too weak to wear, as it is actually harder to carry a suit of full plate than it is to wear it)

Another odd effect, usually found in Adventure and Role-Playing games, is an inventory limit on a single kind of item. The classic example is being able to carry 99 healing Potions and 99 Antidotes, but not 198 Potions or even 100. Some games have even more stringent limits, which sometimes are item specific, and oftentimes aren't internally consistent (you might be able to carry around 50 healing potions, but only 10 healing herbs, because herbs are a different item category).

Compare Extended Disarming, which often happens when a character is asked to empty out their hyperspace arsenal. Compare also Variable-Length Chain, where chains and whips can "stretch" to attack a far target without being long when unused.

Contrast Walking Armory, where the character is actually shown carrying all of their weapons on their body, and Limited Loadout, which is where there's a more (relatively) realistic limit to the number of weapons one can carry.

The MythBusters tested whether the arsenal would significantly slow down an actual person who attempted to use this trope in Real Life. The answer was that an ordinary person would be significantly slowed by the extra gear, but a particularly athletic person (such as a professional MMA fighter) might be able to pull it off. Verdict: Plausible.

For more general (and non-Video Game) applications, see Hammerspace. For a specific item that does this, see Bag of Holding.

"How did you even walk?"

When Grime asks Sasha to not bring any weapons to their dinner with Anne, Marcy, and the Plantars, Sasha reluctantly complies as she removes all of the hidden daggers from her, with most of them being tucked within her right boot. Grime even asks how she manages to store that many daggers onto her boot and still walk normally.

"How did you even walk?"

When Grime asks Sasha to not bring any weapons to their dinner with Anne, Marcy, and the Plantars, Sasha reluctantly complies as she removes all of the hidden daggers from her, with most of them being tucked within her right boot. Grime even asks how she manages to store that many daggers onto her boot and still walk normally.