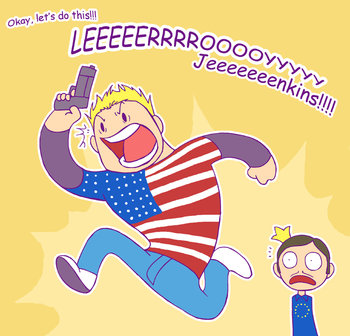 Oh my God, he just ran in... SAVE HIM!
"Fools rush in where angels fear to tread."
— Alexander Pope
Advertisement:

You're playing your favorite MMORPG, First-Person Shooter or other online combat game. You and your team have come up with a workable strategy to tackle a challenging opponent. It will require organization and good timing, but you're sure it will work if you get everything set up in advance... wait, did KillerMonkeyz548 just open fire? Congratulations, your brilliant plan has just been ruined in one move by a Leeroy Jenkins.

The Leeroy Jenkins (or just Leeroy for short) is a specific type of Noob who has no patience for complicated plans, preferring to charge full-tilt into the fray and start attacking whatever's in front of him. Since this is a semi-viable strategy some of the time (depending on what game you're playing and the difficulty of the opposition), a Leeroy can remain undetected until the team hits the first real challenge, whereupon his recklessness gets everyone killed. Any attempts to point out that he had totally ignored the plan will be met with words to the effect of "plans are stupid". They will be The "Why Wait?" Combatant, though a Leeroy will represent the worst possible version of that behavior. And he will never retreat.

On the plus side, a Leeroy can sometimes be detected before they cause calamity when you see them utter (or type) words to the effect of "Hey, watch this!" In groups with experienced players, the phrase can be translated as "Immediately stop moving toward those enemies with very big guns and back out of Alpha Strike range because Sir Badassboi is about to do something incredibly stupid and attention-grabbing." Never attempt to save a Leeroy from the consequences of his mad charge; this will only encourage him, as well as provide repeated amusement — he will often attempt the exact same thing again when he's revived. Should the group somehow miraculously pull through, don't expect him to wait for you to recover; he's already charging the next target.

If your leader doesn't wise up and punt him from the team after the first couple offenses, he can become a real-life gaming example of The Millstone, ruining any chance you have of completing your quest or mission successfully.

The trope is named after an infamous World of Warcraft video that was popular around the net during the late 2000s. For more information, see Leeroy Jenkins Video.

"Stop being such a Leeroy" has become multiplayer jargon in the time since, and it's sometimes used as a verb "to Leeroy" meaning to act in this way. Ironically, the original staged video

can be seen as sympathetic towards Leeroy in that it also mocks and parodies excessive planning in parties. Considering that many of the mistakes made by the group in their attempt to save Leeroy were part of the group's original plan, the implied point is that if you have a Leeroy Jenkins in your party, you probably deserve him. The exception is a Pick-Up Group... in which case you know what you're going to get.

If an A.I. character that you need to keep alive does this, you have a classic example of a bad Escort Mission.

Some players also use "pulling a Leeroy" to refer to rushing in heedless of your own safety even when this is a viable tactic.

If, rather than being a Noob, the Leeroy is doing this purposefully to get a laugh out of disrupting the Serious Business that internet gaming has become or just to mess with his group in general, then he is a Griefer and should be kicked from the group posthaste.

Something of a Player Archetype. Compare Attack! Attack! Attack!, The Real Man, Indy Ploy, and Strategy, Schmategy. See also some Challenge Gamers. Not to be confused with avant-garde musician Leroy Jenkins

or the sports columnist of the same name. Underequipped Charge is related, but a character may perform one out of desperation rather than recklessness.

For other similar character behaviors, see Reckless Sidekick, Unwitting Instigator of Doom, and Fearless Fool, as well as some incarnations of The Berserker. This type of character may have been inspired from living with a Martyrdom Culture, or trying to perform a Zerg Rush by yourself. Usually, he is a bane of The Strategist, unless the latter is so Crazy-Prepared they've factored it in from the beginning — and, occasionally, indeed counted on it. A Defensive Feint Trap is an attempt to bait the enemy into doing this. If he is on the road, it is very likely he Drives Like Crazy.

Contrast We Need a Distraction and Crazy Enough to Work.

Of course, the most important thing to remember is that—