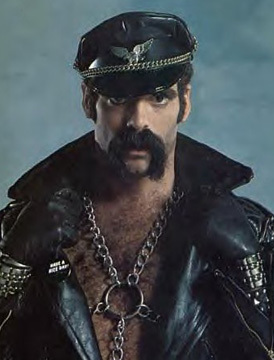 Glenn Hughes. Village Person. 1950–2001. Buried in this very outfit.note Ironically, he was one of two members of the band who was actually straight.
Tobias: I need something that says, "Dad likes leather."
Store Clerk: Something that says... leatherdaddy?
Tobias: Oh, is there such a thing?
— Arrested Development
Advertisement:

The defining characteristic of both groups was a certain visibly identifiable look and behavior. Which, of course, meant that once TV got around to even acknowledging that there was a gay subculture, these two were mashed together as possibly the stereotype to portray, after "classical" gay archetypes. Especially if the setting involved jail at any point. The popularity of The Village People and the artwork of Tom of Finland probably helped.

It isn't really clear why this archetype never spread to the fantasies of straight women, even though there's nothing inherently gay about it aside from the stigmas attached to it.

May or may not be Hell-Bent for Leather. Not to be confused with the multitool of the same name. Or Leatherface.