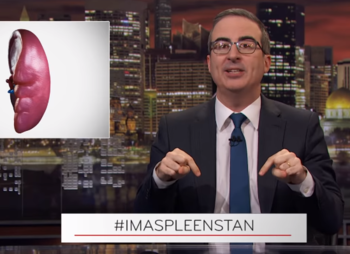 #YAAASSSPLEEN
"Finding out I had herpes was quite a shock! #pikachu"
— Todd in the Shadows
Advertisement:

When hashtags are used for comedic purposes. It is mostly used in these two scenarios:

Can overlap with #EngineeredHashtag if the advertised product or Show Within a Show is self-aware or a deliberate parody of the practice. Compare Trade Snark, the corporate version that predates the Internet, and Faux Computer Code, which were used in the pre-Twitter days of the internet. Also compare to Clickbait Gag, another appropriation of an internet trend for comedy's sake.

No Real Life Examples, Please! We don't really want to hear all the clever puns that your friends posted last week on Twitter. You can still post them directly on the Creators pages.