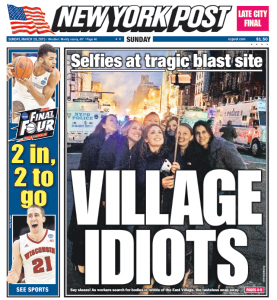 Take a selfie in front of a fire? Sure, What Could Possibly Go Wrong?
"The end comes, as it was always going to, down a video phone!"
— The Doctor, Doctor Who, "The Eleventh Hour"
Advertisement:

Social media are regularly used for circulating news and sharing whatever you're doing with your friends in the form of status updates, pictures, or videos. This can be really fun and addictive, and although spending a lot of time on Facebook, Twitter or Instagram might distract you from living in the moment, it usually won't actually hurt anybody. It also goes along with an Internet Safety Aesop since you should think twice before you post something on the internet.

But what if you find yourself in a dangerous situation that requires rapid action, such as a natural disaster, a medical emergency, or a crime in progress? The logical thing to do in this case is to either run to safety if you can't help or hurry to the victims' aid if you can...and yet some people are so hooked on social media that their first impulse is to start posting about it there before they even think about responding to the emergency. Sure, whatever's happening is newsworthy, but it'll be too late to do anything about it if you waste precious seconds fiddling with your screen.

This is Truth in Television due to its roots in human psychology—when you see an outright incredible scene, it's so hard to believe it's actually happening that your first reaction will be to actually prove it's real by putting it on the Web. It can also be an aspect of Bystander Syndrome where everybody assumes that someone else is already taking care of it and that there's nothing for them to do but watch. Keep in mind that social media can also be used legitimately for sharing information during a disaster when other means aren't available, or more specifically submitted to the proper authorities as evidence of a crime being committed; this trope is specifically about using it in a way that's inappropriate for the situation.

Compare with the Intrepid Reporter, a professional journalist who ought to know the risks they're taking by being there; the Apocalyptic Log, which is left by someone in case they don't survive to tell the tale, instead of by some Twitter addict who just doesn't realize how much danger they're in; and Endangering News Broadcast, which is usually more dangerous to the subject than to the filmer. Related to New Media Are Evil and Everything Is Online. Sub-trope of Skewed Priorities and Social Media Is Bad. This is a common trait of a Selfie Fiend, and even more prevalent with the Bad Influencer.

Zuma is rescuing a family

While Zuma is rescuing a family trapped in a car underwater, the teenage daughter decides this is the perfect time to take a selfie, which her father reluctantly takes part in. - PAW Patrol The Movie 2021

Zuma is rescuing a family

While Zuma is rescuing a family trapped in a car underwater, the teenage daughter decides this is the perfect time to take a selfie, which her father reluctantly takes part in. - PAW Patrol The Movie 2021