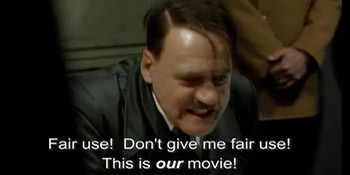 "Why, these copyright attorneys are no better than Nazis!"
"Do me hard, in the ear
Yes in the ear, your brains will die
Do me now, on the bottom
Yahoo, I'm part retard."
— A Mondegreen sub of The Indian Nipple Song

Most people think speech or song in languages they do not understand sounds strange. Some find it amusing to add their own interpretations or "translations" to such sounds, and the internet makes it easy to distribute. Thus the Gag Sub, which is much easier to create than redubs, is born.

There are basically two kinds:

Subtitles that have nothing to do with the original