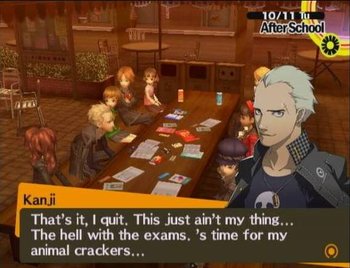 Pictured: Kanji, and Kanji's face, talking to his friends.
Advertisement:

Certain games have a drawing of a character's face, usually in a portrait style. In RPGs or other games with menus, these are usually displayed next to the character's name. Also, in some games with talking NPCs where one can't directly see characters' faces, a portrait may be displayed next to their text box. If they don't, then they may be of Nominal Importance. (Some games may try to give everyone a portrait, but there are usually unique ones for important characters.) Prevalent in RPGs, since there tend to be a lot of NPCs in them, as well as a staple of Visual Novels.