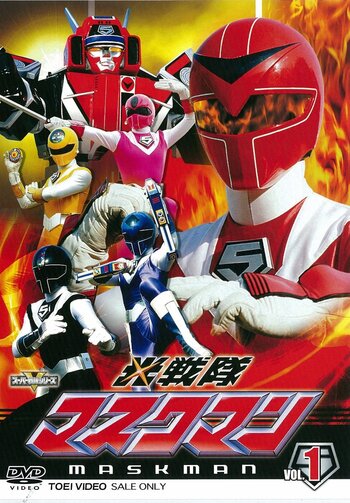 Inside the human body, a mysterious power is hidden. With training and discipline, this infinite power can be obtained.

Hikari Sentai Maskman (Light Squadron Maskman) is the eleventh Super Sentai series, running from 1987 to 1988. Not to be confused with the Korean animated series also titled Maskman.

Commander Sugata, a master of the mysterious Aura Power, assembles a team of five martial artists and instructs them in the use of their inner Aura to offset the menace of Tube, a once peaceful empire now ruled by the evil Emperor Zeba, who seeks to extend his reign to the surface world. Red Mask Takeru's girlfriend Mio is in fact Iyal, Princess of Tube, who is sentenced to sleep forever in an ice coffin for falling in love with a surface dweller. Maskman fights for peace both on and beneath the earth.