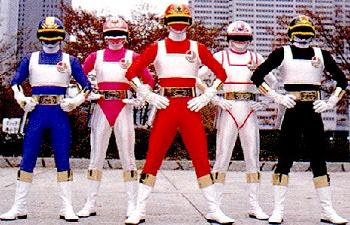 Dengeki Sentai Changeman (Blitzkrieg Squadron Changeman) is the ninth Super Sentai series, running from 1985 to 1986. Until Goranger was retroactively included as a Super Sentai installment, it was also the longest with 55 episodes and two movies (both original works); in terms of episode count, it's still the second longest in the franchisenote While Kaizoku Sentai Gokaiger is four episodes shorter, it had three movies during its run along with a crossover with the following season, plus being the main Sentai season represented in the first Super Hero Taisen movie; while Changeman is the longer season, Gokaiger having five movies more than makes up the difference.
Advertisement:

In order to save the world from threat of invasion by the Great Star League Gozma, a special force called the Earth Defense Force is set up. One day, the Gozma launch an attack on them and have them on the ropes. That is, until the Earth itself grants five officers the power of the Earth Force, which lets them become the Changemen.