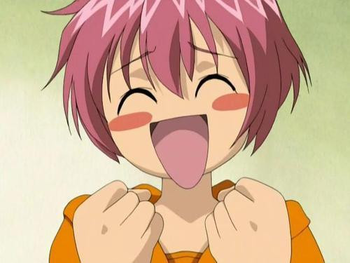 Shuichi knows how to lighten up the mood. note This is after learning part of his lover's Dark and Troubled Past.
"I get tired just watching him."
— Suezo, on Genki from Monster Rancher
Advertisement:

A character type that most often appears in female-oriented media, best described as the human equivalent of a parakeet: small, hyperactive, and annoying yet loveable. The Keet fills the role of a little brother to the cast: he is kind, hyper, inquisitive, talkative, and slightly younger than the main characters (though still too old to justify his behavior). He is also In Touch with His Feminine Side, an attribute that makes him an Audience Surrogate for the female audience of an all-male Cast Full of Pretty Boys.

Guys like this are particularly prevalent in Yaoi, where he's probably an Uke paired with a far larger Tall, Dark, and Handsome brooding type. In other types of works, he's less likely to be a love interest as he is an Audience Surrogate.

Compare Bratty Half-Pint, who has hyperactivity like the Keet's but is much younger.

Tigger is always bouncing in on his friends when they least expect it.

Tigger is always bouncing in on his friends when they least expect it.