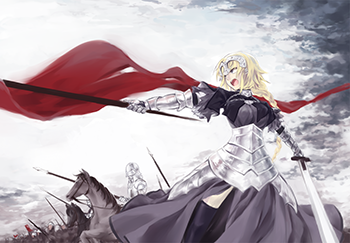 One of the many portrayals of Jeanne d'Arc.
Plutarch: We had to save you because you're the mockingjay, Katniss. While you live, the revolution lives.
Katniss's narration: The bird, the pin, the song, the berries, the watch, the cracker, the dress that burst into flames. I am the mockingjay. The one that survived despite the Capitol's plans. The symbol of the rebellion.
— Catching Fire
Advertisement:

Jeanne d'Archétype is a fictional character inspired by Saint Joan

of Arc.note Spelled "Jeanne d'Arc" in her native French. This can incorporate various elements of the historical Joan's story. This character is Always Female, usually young, often an Action Girl, and often of humble origin. Her devotion to a religion, her country, or simply a desire to protect her loved ones causes her to assume an active role in liberating the oppressed from an overbearing force, eventually becoming not only a respected leader, but also a living symbol and a reminder of just how unjust the oppressors are if they bring out the warrior in the most unlikely of people. Therefore, her example directly inspires many otherwise ordinary people to follow in her footsteps and join the same cause.

Realizing her importance, it is highly likely her enemies will eventually exploit her own Honor Before Reason to lure her into a trap and subject to a public trial and execution. This, of course, is bound to backfire, as even past her untimely death, her movement will live on as her martyrdom drives them to more zealous and inspirational levels up to veneration as a larger-than-life Divine Figure, sometimes complete with the title "Saint" or any other equivalent.

She may also crossdress, experience supernatural voices or visions, be chaste or celibate, wear heavy armor(which may double as a dress if she's not hiding her femininity), be a farm girl, join the military, or be persecuted and martyred. Extra points for suffering a Cruel and Unusual Death such as being burned at the stake. (Especially if even that involves voluntary martyrdom.)

May overlap with Sweet Polly Oliver, Lady of War, or Church Militant. May also overlap with Xenafication is applied to a pre-established character.