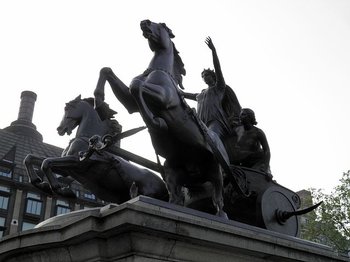 A statue of Boudica surveying a city whose ancient settlement she burnt to the ground.
When in London next, take a trip to the London Museum and have a look at the striped piece of rock that represents a geological section of the ground beneath the city. Running through it is a stripe of blackness a half-inch thick, this being the result of Boudica's burning rage. In my experience, when men get cross, they may at worst leave a dent in the side of the fridge. Heed and take note.
— Alan Moore, From Hell
Advertisement:

Boudica (or Boudicca, or Boadicea, or Buddug) was a queen of the Iceni, a tribe resident somewhere around modern Essex (or Norfolk) in Britain, early in The Roman Empire, and is most famous for leading a rebellion during Nero's reign, razing Colchester and London and making Nero briefly think twice about the whole "Roman Britain" thing, until she was defeated in about 60-61AD somewhere along the Roman road now called Watling Street, whereupon she either died of illness or committed suicide, Depending on the Writer.

Her motivations for her uprising originate from the politics of the Emperor Claudius' time, where her husband, Prasutagus the king of the Iceni, nominally retained his independence in a period where Rome was trying to consolidate his rule over Britain. Prasutagus decided to placate Rome by naming the Emperor heir to his lands (he had two daughters and no son.) This spectacularly backfired and someone gave orders to invade Iceni lands, confiscate their property, then flog Boudica and rape her daughters (it is unlikely to have been The Governor of Britain as he was putting down a rebellion in Wales, the most likely origin was Seneca the Younger, as he did loan the Iceni 300,000,000 sesterces that they did not want).

This did not end well for Roman Britain.

What followed was a Roaring Rampage of Revenge comparable to Genghis Khan's ravage of the Khwarezmid Empire (because the latter killed his messengers). Boudica was elected leader of a massive coalition of British tribes, and first headed to Camulodunum (modern Colchester, and commonly cited candidate for Camelot). The city's defenders asked for reinforcements... and got about 200 auxiliaries. The rebels stormed the city and methodically destroyed the entire place; killing every man, woman, child, and slave in the city before burning it to the ground (a large layer of ash is buried beneath the city even to this day). Other reinforcements (an entire legion, IX "Hispania") were also wiped off the face of the Earth, contributing to the legend of the "Lost Legion". The rebels next turned to Londinium (modern London). The Roman Governor Suetonius raced back there from Wales before its fall, but judged he lacked the strengh to defend it. He and his men left the city, but not before evacuating as many of the civilians as they could. When the Iceni reached Londinium they destroyed it, whereupon another great massacre (of both the Romans and Romanised Britons who remained in the city) ensued. Verulamium (modern St. Albans) was destroyed, too.

According to Cassius Dio and Tacitus, people were carved up and displayed in a variety of incredibly creative fashions - the noblewomen in particular were beheaded, with their breasts cut off and sewn to their mouths. While historians agree that the three massacres took place, there is debate as to whether or not torture of this nature was present. Additionally it is unknown whether or not Boudica ordered these atrocities, refused to prevent them, or was simply unable to keep her soldiers in line. Though most modern documentaries and fictional depictions of Boudica's Rebellion assume that she directly ordered them. note It is also worth noting that in the ancient world actions of this nature were more common. While that doesn't excuse them, or mean that people in the past weren't upset by them, it does mean they weren't abnormal.

As per the accounts by Cassius Dio and Tacitus note  We unfortunately only have Roman accounts for what happened. This is due to the Britons not having written language in this time, the Romans started to take this threat seriously. The Roman Governor Suetonius Paulinus rallied his remaining troops to Hold the Line somewhere along Watling Street, and foiled Boudica's Attack! Attack! Attack! tactics by methodically forming a shield-wall with a forest behind them and a gorge at their sides and killing the first to charge with thrown javelins, then pressing on the British lines with a wedge-shaped charge. They apparently outnumbered the Romans 200 to 1, but even taking into account how Romans loved to exaggerate their numbers to make their defenses and victories look even more impressive, most agree that the Romans defeated a numerically superior army with their standard discipline and shield wall formation. The Iceni were broke and routed, and when the Britons attempted to flee, they got trapped by their own logistics train, and the rebellion was slaughtered there and then. As mentioned above, Boudica died shortly afterwards in unclear circumstances (she might have been Driven to Suicide, or she might have been killed in the fighting). Following the rebellion, Suetonius, Seneca, and pretty much every Roman politician stationed in Britain were recalled to Rome, stripped of their positions to prevent them from provoking another revolt, and replaced by more diplomatic politicians who got the remaining natives to submit by treating them better. All told, her rebellion left between 70,000 and 80,000 Romans and Britons dead.

She was forgotten by The Middle Ages, but rediscovery of Roman histories during the Renaissance led to her fame rising, surging massively in the reign of Queen Victoria, who was her apparent namesake in meaning ("Boudica" is said to derive from *boudā (victor)). She benefited greatly from the Romantic revival where the drive for folklore and native traditions led many to revisit their Celtic past, and reclaim Boudica as a founder-precursor for British might and resolve. The Romantics naturally saw her as a female Byronic Hero, proud, fierce, driven to violence by an unjust society, and doomed by a tragic fate. The emerging suffragette and feminist movement, saw her as a victim of appalling abuse striking back against her oppressors, and they and later writers claimed her as a hero and an icon of women, proof that the latter can be More Deadly Than the Male. This undoubtedly says more about the recent past than it does about Ancient Britain, and the victims of the three massacres tend to either be forgotten or ignored.

Likewise at the time, the British had become an empire far vaster and wealthier than the Romans could ever fathom, and modern historians comment on the irony of a bronze statue of a victim and opponent of Roman Imperialism such as the statue of her and her daughters in Neoclassical style that now overlooks Westminster — slap bang in the middle of the city she and her forces razed and burned to the ground — erected by her latter day descendants and Spiritual Successor who had themselves become oppressors and colonizers. Many note that Queen Boudica would have had far more in common with Rani of Jhansi of the Indian Rebellion of 1857, than she would with her namesake Victoria. Victorians however felt that they, as Boudicca's descendants had avenged her death and defeat. The inscription on her plinth is : Regions Caesar never knew /Thy posterity shall sway.