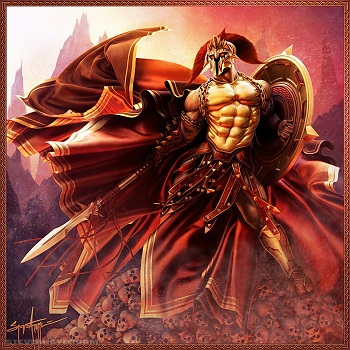 They're kind of like that.
"Pomena loves the orchard. And Liber loves the vine.
And Pales loves the straw built shed warm with the breath of kine;
And Venus loves the whispers of plighted youth and maid,
In April's ivory moonlight. Beneath the chestnut shade.
But thy father loves the clashing of broadsword and of shield:
He loves to drink the steam that reeks from the fresh battlefield:
He smiles a smile more dreadful than his own dreadful frown,
When he sees the thick black cloud of smoke go up from the conquered town."
— Sir Thomas Macaulay, Lays of Ancient Rome
Advertisement:

A character regarded as a deity or manifestation of war (or battle, murder, conflict, etc.). They're most likely a member of the setting's ruling pantheon when they are the real deal, but could be any character (including a mortal) who is falsely regarded by other characters as a god(dess) of war. The War God in question often exemplifies either the physical or strategic aspects of war, although they can embody both.

War Gods are of course nearly all very badass, possibly also a Four-Star Badass among the pantheon. They tend to be Blood Knights by nature and are often the only god that the Proud Warrior Race would bother to worship, if they don't want to fight them themselves. They are often cast as villains.

There's also a tendency in various works of fiction to pair one with a Love Goddess in something of an Opposites Attract manner, either as unlikely friends or romantic partners. Considering Ares and Aphrodite were lovers, this makes this idea Older Than Feudalism; it may be a sort of cosmic version of All Girls Want Bad Boys. Also, some of these figures (usually goddesses) were gods of both fertility/love and war. If you're as violent as them, they may fall In Love with Your Carnage.

A War God is frequently involved in some form of Divine Conflict. If he encompasses ALL forms of violence (as Ares did in Greek mythology) he may be seen as a God of Evil. Compare also Destroyer Deity. Subtrope to Stock Gods.

If you were looking for the book series or the videogame series, see The War Gods and God of War series respectively.

TWA gives a template for a war god.

TWA gives a template for a war god.