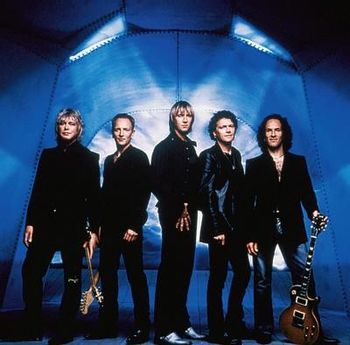 Originally formed in 1977 in Sheffield, England by five teenagers who really liked glam rock, Def Leppard became grouped with the New Wave of British Heavy Metal (NWOBHM) before turning early-MTV pop-rock sweethearts. After kicking out a founding guitarist for too much drunken tomfoolery (Pete Willis), they released a well-received rock album (Pyromania), lost another sixth of a member (Rick Allen's left arm), released a phenomenally successful pop-rock record (Hysteria), which was essentially aiming to be "the hard rock version of Thriller", then the other original guitarist drank himself to death over the course of a few years (Steve Clark).

Best known for predicating a thirty-year career on the bawdy Chorus-Only Song, "Pour Some Sugar on Me" or their anthem "Rock of Ages" (which famously begins with the utterance of the page quote), they continue to release records (much more often than in their heyday) and do a world tour almost every year since 2003. The band later experienced something of a career resurgence with well received collaborations with Tim McGraw and Taylor Swift introducing them to a new audience.

They are one of only five bands to have two original (non-greatest hits or live) albums sell more than ten million copies each; the others being Van Halen, The Beatles, Led Zeppelin, and Pink Floyd. Musically, they are known for melodic dual lead guitarists, four-part harmonies both on record and live, and massively produced, Queen-esque albums.

"Rise up, gather round, burn these tropes to the ground!"

Def Leppard were the subject of a Made-for-TV Movie in 2001. Hysteria: The Def Leppard Story follows the band's beginnings and rise to stardom, focusing especially on the alcoholism of both Pete Willis and Steve Clark and on Rick's accident. There's also a little something about Pyromania and Hysteria in there somewhere.

This movie rocks the following tropes: