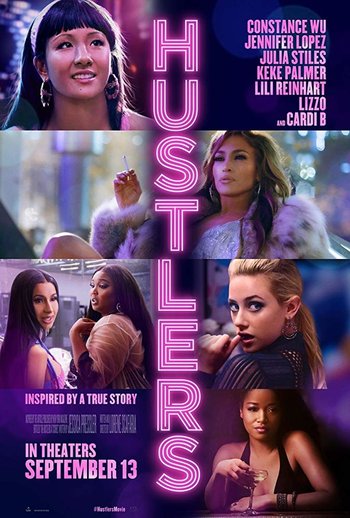 "This city, this whole country, is a strip club. You've got people tossing the money, and people doing the dance."
—Ramona
Advertisement:

Inspired by a New York Magazine article, “The Hustlers at Scores”, the film follows a stripper named Dorothy/Destiny (Wu), who befriends veteran dancer Ramona Vega (Lopez) and teams up with her, plus fellow dancers Annabelle (Reinhart) and Mercedes (Palmer) to con rich Wall Street men after the 2008 recession hits their club hard. The film is framed to show Dorothy telling her story to a reporter (Stiles).

Compare Magic Mike, which is also set in a strip club and loosely inspired by real life events.