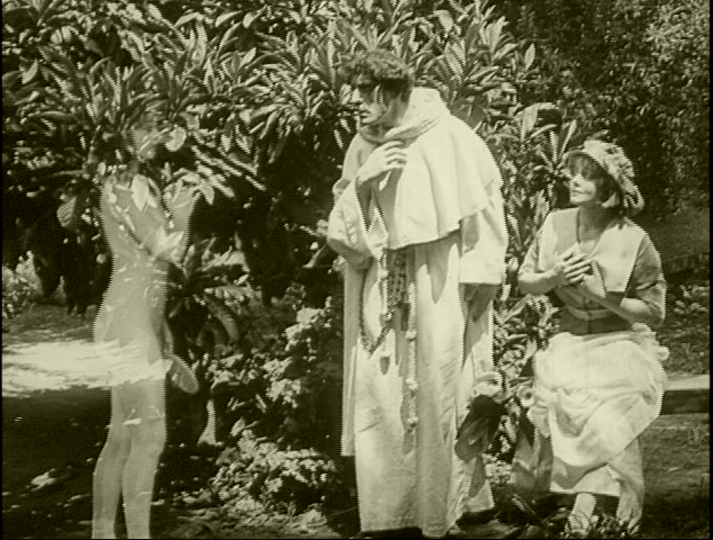 This is a pretty weird Love Triangle.

A pastor delivers a sermon on the theme of hypocrisy, specifically calling out his flock for making a surface display of piety. It's true, as most of the congregation isn't paying attention, with the boys in the choir reading the funny pages and almost everyone else generally bored, except for one attractive woman in the audience who looks at him adoringly. The sermon goes over badly, and some of the pastor's parishoners—all of them well-heeled, from the looks of the fancy top hats and dresses—discuss firing him.

The pastor then has a dream in which he appears dressed as a medieval monk. He attempts to lead his parishoners on the road to Truth, a hard and narrow path up a steep incline to a mountaintop, but all but two of his parishoners find excuses not to climb with him. The two women who follow, the adoring woman and another in the congregation, can't make it up because the path is too steep. A flashback then shows "Gabriel the Ascetic", a medieval monk played by the same actor who plays the pastor, crafting a statue of Truth.

But that's not what this film is remembered for, to the extent that it is remembered. The pastor, in his modern-day dream, liberates from the top of the mountain a character called the Naked Truth—played by a fully-nude woman. In 1915.