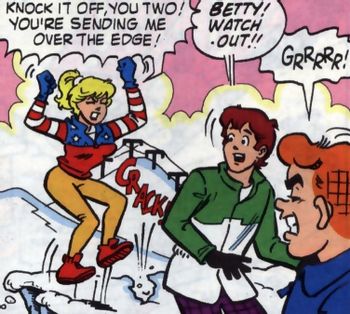 She has no idea how right she is (They're also making her "hopping mad")…
Kate: That is... a really interesting painting.
White: Thank you. Yeah, that's me, taking the bull by the horns. It's how I handle business. It's a metaphor.
Kate: I get it.
White: But that actually happened, though.
— DodgeBall: A True Underdog Story
Advertisement:

Alice uses a figure of speech. Bob reiterates the usual metaphorical meaning. Alice says no, she meant it literally.

There's also a variation in which Bob questions the metaphor, and Alice responds sarcastically that she meant it literally. See also Visual Pun (when a play on words is given literal visualization), Not Hyperbole (where what seems like an exaggeration isn't) and Made from Real Girl Scouts (where the literal meaning is true... and you really wish it wasn't).

A common way to lampshade the trope is "I've heard of [X], but this is ridiculous!".

Compare Double Meaning, Not Hyperbole, No Longer with Us, Exact Words, Metaphoric Metamorphosis. Contrast Literal-Minded, where someone mistakes a metaphor for its literal meaning.

Alternative Title(s): Not A Metaphor