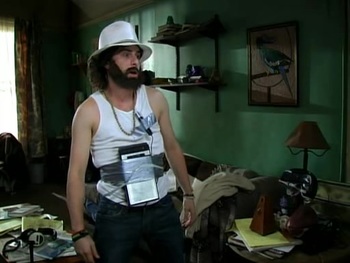 Improvements in recording technology have been a real boon to this trope.
Advertisement:

The miniature microphone, as worn by an undercover officer or an informant, is the single most unreliable piece of technology of all time. They are prone to shorting out, smoking and sparking, bad reception and easy detection - but strangely, they are immune to clothing noise, although this is the primary handicap of their real-world counterparts.

The bad guys will always discover the microphone itself, never the much bulkier transmitter to which it is connected (usually about half the size of a box of cigarettes). Invariably, it is secured to the body using large swathes of white bandage, rather than the small piece of transparent tape used by film professionals. On the other hand, budgetary limitations often result in real police forces using surprisingly antiquated technology.

As a variant, a parabolic dish device operated by Spies in a Van is used to listen in on criminal conversations.

Routinely results in the perpetrator being Caught on Tape.

The application of the wire on the subject's body is often used for Fanservice (giving an excuse to show a shirtless man or woman) or Fan Disservice (if the focus is on how uncomfortable it is to have electronics taped to your body).

See also Engineered Public Confession, Incredibly Obvious Bug. See also Two-Way Tapping when the device itself isn't that obvious, but the people listening in are heard by those speaking.