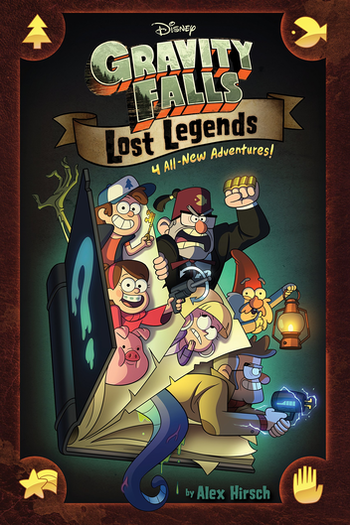 Gravity Falls: Lost Legends is a graphic novel set within the universe of Gravity Falls. Written by series creator Alex Hirsch, it consists of three stories that take place during the final season, as well as a fourth taking place during Grunkle Stan's childhood. The comic was released on July 24, 2018.
Advertisement:

Bewarb, there may be unmarked spoilers ahead.
Proceed with caution.

In the gnome village deep in the woods of Gravity Falls, tonight is the one night in every thousand years that Shmebulock, cursed to normally be unable to say anything but his name, can speak freely. And speak he does, as he regales his guests (the readers) with four stories about the Pines Family and their friends:

BY LUCIFER'S BEARD, WHAT WOULD IT TAKE FOR MORE GRAVITY FALLS?!