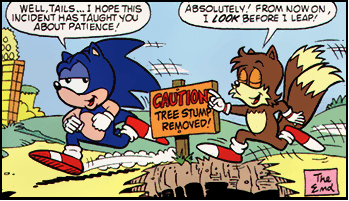 At least Tails can fly himself out of that pit.
"Lying is wrong! I'd know that if only I'd paid attention to anything that's ever happened to me before!"
— Stan Smith, American Dad!, "The Phantom of the Telethon"
Advertisement:

Some characters have a particular trait or mannerism that's come to be viewed as an overall part of them. Maybe they're stingy, or abrasive, or just like using a lot of profanity. Along comes an episode with An Aesop, and a character learns how good it is to be generous, or friendly, or that they don't need curse words to make themselves known.

Then, two episodes later at the most, they're back to hoarding their money, snapping at people, or cursing like a sailor. They've just run into Aesop Amnesia.

Aesop Amnesia is a sort of Snap Back that assures that Status Quo Is God from a character development point of view. After all, if you change something about the character that fans find enjoyable or defining about them, they're not going to be happy; and if that character trait provided a valuable foil for other characters, neither will the writers that come after. (Thus, you're much more likely to run into it on a series where writing duties are handled by a rotating set of writers and guest writers.)

And, of course, it allows the character to learn the same lesson all over again later!

In more recent series, this may eventually be lampshaded, especially if the show has a strong comedy element. In dramatic series, not so much.

A secondary sort is where the same series keeps trying to teach the same moral over and over again. This is slightly different than when the show has a certain theme or Aesop as their underlying premise, but rather where a show with a broad premise just keeps hammering home that one particular one until the viewer wants to shout "I get it already!"

A standard of cartoons, especially those aimed at fairly young children (or where the writers think anyone under thirty is a dope). In comic books, this frequently occurs thanks to the Fleeting Demographic Rule. In films and books, this is often a sign of an unplanned sequel, which may result in a reset on the character's growth.

When done well, it can show that it's not always easy to change oneself, even if one wants to, and people may fall back on old habits. When done poorly, it can seem as though the writers forgot about the character's development and/or want to ignore it for the sake of conflict.

This is Truth in Television to some extent. People do not always overcome their flaws as quickly as fiction sometimes would like them to. Contrast Epiphany Therapy, where characters resolve long-standing issues and flaws too quickly. Compare Ignored Epiphany, Remember That You Trust Me and Lost Aesop. A Sub-Trope of Yo Yo Plot Point.

Seems the Pirate has not learned to stay a Pirate.

Seems the Pirate has not learned to stay a Pirate.