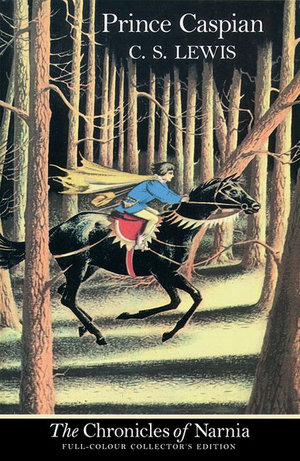 Aslan: Welcome, Prince. Do you feel yourself sufficient to take up the Kingship of Narnia?
Caspian: I - I don't think I do, Sir. I am only a kid.
Aslan: Good. If you had felt yourself sufficient, it would have been proof that you were not.
Advertisement:

The second installment in The Chronicles of Narnia and the fourth book chronologically. A year after the events of The Lion, the Witch, and the Wardrobe, the four Pevensie siblings are summoned back to Narnia, where a thousand years have passed from the perspective of that world's relative time flow. Narnia has mostly been overrun by the descendants of an exiled group of pirates from Earth called the Telmarines (now ruled by the usurper Miraz), but the rightful heir, his nephew Caspian, has magically summoned Narnian help, receiving it in the form of the Pevensies. Once the Telmarines have been beaten back and Caspian proclaimed king, Peter and Susan are told they are now too old to ever return to Narnia.

Like The Lion, the Witch, and the Wardrobe before it, the book got a film adaptatation in the form of Prince Caspian, starring Ben Barnes in the titular role.