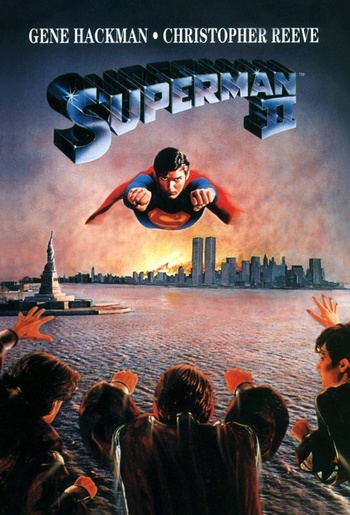 Superman: General, would you care to step outside?
General Zod: Come to me, Son of Jor-El! Kneel before Zod!
Advertisement:

General Zod and his two allies, convicted criminals from Superman's home planet of Krypton, are accidentally freed from the Phantom Zone. (Their imprisonment is the opening scene of Superman: The Movie.) The trio arrive on Earth, eager to conquer the planet — and Zod is all too happy to discover Jor-El's son is still alive. Amidst his battles with Zod, Superman increasingly romantic relationship with Lois Lane is also explored further.

The film was mostly filmed concurrently with the first film, but due to a Troubled Production they stopped midway to focus on getting the first one wrapped up. Before resuming production over a year later director Richard Donner was fired over Creative Differences with the Salkinds, the producers, because of debates over the escalating budget and comedic elements. Richard Lester — who admitted to never having read a comic book (Superman or otherwise) in his life — was hired as the director to finish out the film, and to keep Donner out of the loop they refilmed much of the movie under Lester so that he could get sole credit. While the result was largely seen as satisfactory, the cast and crew were angry about this decision and many declined to return to work on Superman III.

An alternate cut of this film, Superman II - The Richard Donner Cut, was eventually released on DVD in 2006. While several scenes had to be reconstructed from incomplete materials (in one case, a 1978 screen test between Christopher Reeve and Margot Kidder was used), this cut is as close to Donner's vision of Superman II that anyone will ever see. The primary differences involve removing the more slapstick elements, keeping Superman's powers consistent and adding a few deleted scenes, most notably scenes of Jor-El (who was originally removed due to contractual conflicts with Brando).

Example of:
Kneel Before Zod