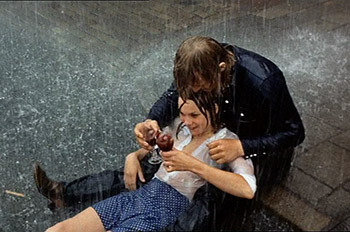 They could probably have chosen an easier way to water down that wine.
"I want to walk in the open wind
I want to talk like lovers do
I want to dive into your ocean
Is it raining with you?"
— Eurythmics, "Here Comes the Rain Again"
Advertisement:

In fiction, love and rain just go together and lovers soaked in rain is a good old romantic classic.

Rain seems to go along with pivotal moments in characters' lives. It's implied that if you can ignore bad weather and brave the elements, then your big moment is even more real and intense and genuine. If you want to be deserving of your love, you won't care if it's raining, you will rush out into the rain to be with her or him, express what's on your mind and have The Big Damn Kiss. This trope often occurs when the couple gets officially together, finally confessing their love, or if their relationship with bucketloads of Unresolved Sexual Tension becomes resolved with a passionate kiss. This variation is very close to Redemption in the Rain and naturally, Love Confession or similar tropes from Romance Arc might accompany it.

Somewhat tamed variant is Happy Rain when lovers stroll outside and it starts raining. It's not cold and our lovers happen to love the rain — they have one another and it's a good opportunity to get closer, so never mind a few drops of water. Could be combined with sharing an Umbrella of Togetherness.

Being outside in the rain often leads to Sexy Soaked Shirt. In Bollywood films, Wet Sari Scene is considered especially romantic if it's caused by rain.

Compare Caught in the Rain when it's pouring and soon-to-be-lovers must seek shelter and get out of the wet clothes. They might kiss or make love after one or both of the participants have just escaped a rainstorm.

The trope is so common that there often occurs a modernized version: lovers splashed with sprinklers or a hose. It could be Invoked to play romantic and set the mood. If it's accidental, it could be Parodied or Played for Laughs.

See also Snow Means Love. Underwater Kiss is related to the variant when the couple kiss. Can be complemented with Electric Love if the romance is associated with thunderstorms. Shower of Love is similar, where the couple gets a little more intimate.