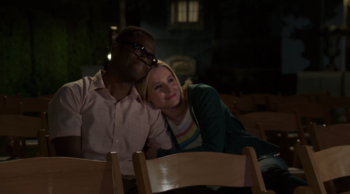 "Time means nothing. Jeremy Bearimy, baby. We'll get through this, and then you and I can chill out in the dot of the 'I' forever."
"What's that thing you humans say when you're playing chess and you trap your opponent into an inescapable position? Oh, right. Eat butt, you ding dongs!"
— Shawn

Michael is too incapacitated by his anxieties to properly fulfill his role as the neighborhood architect and welcome the first human test subject, so Eleanor steps in and takes over to pose as the Architect of the neighborhood. She welcomes the new resident, John, a seemingly ordinary, if flamboyant man, and introduces Michael as her assistant. She gives him the "Welcome to the Good Place" speech and a tour around the neighborhood before letting him go off to explore it further for himself.

As John explores the neighborhood, he runs into Tahani, and it turns out they knew each other. In life, John ran a sleazy gossip blog that wrote a lot of disparaging things about Tahani and generally served as a source of annoyance and misery in Tahani's life. Tahani relays this to the others and they realize that the Bad Place picked out people that could potentially torture the Soul Squad themselves and undermine the experiment's chances of success. This is confirmed when the next new human to arrive is Simone, Chidi's ex-girlfriend.

Eleanor and the others contact Judge Gen and Shawn and say this isn't fair, asserting that having the human test subjects be people who knew the four will mess the experiment up. Shawn is unrepentant, and Gen says it's technically not against the rules, but she'll allow Michael to erase Simone's memories of Chidi so it's not a problem.

After the call is over, Chidi says he won't be able to work with Simone as he should, as their past would always be in his mind, but Michael just says to ignore her for now. Eleanor gives Simone the welcome speech and shows her the neighborhood. Simone is pleased by what she sees, but believes that it's probably just an intense hallucination caused by her dying brain releasing chemicals before she officially truly dies and ceases to exist.

Eleanor and the others assemble in the office, and Chidi's problem is serious. He knows he won't be able to act normally around Simone without possibly jeopardizing the experiment. He asserts that the only solution is for Michael to erase his memories starting from his death, which means he'll forget all of his friends of the afterlife, including his love for Eleanor. This is not a welcome message to anyone, but nobody else can think of an alternative and Chidi had thought about this for a long time, so he's confident in his decision.

Later that night, Eleanor and Chidi spend the evening together reminiscing about the evolution of their relationship, with Michael showing them a montage of their romantic moments in his fake Good Place neighborhood. Chidi reassures a tearful Eleanor that things will work out and he has faith in her, promising her that once this is over, they'll be free to be together for however long eternity goes.

The next day, Michael has reset Chidi's memory to just after he died, and he wakes up in the waiting room. Eleanor opens the door and invites him in to welcome him to the "Good Place".