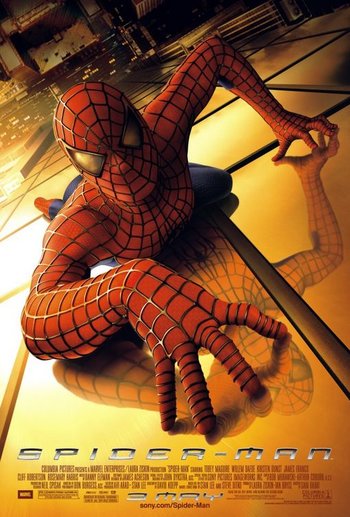 Spider-Man is the first movie in Sam Raimi's Spider-Man Trilogy, released in 2002. It is also the first of many theatrical Spider-Man movies that would follow in the decades to come.

An origin story, it tells the tale of Peter Parker (Tobey Maguire), a nerd who is bitten by a genetically-engineered spider and gets the powers of the arachnid — web-shooting, high jumping, wall-adherability, enhanced strength/endurance and sensing vibrations in the air.

At first, he attempts to use these powers for profit, but when his actions accidentally lead to the death of his Uncle Ben, Peter decides to use his abilities to fight injustice under the name Spider-Man. This comes in handy when the father of his best friend, Norman Osborn (Willem Dafoe), becomes the villainous Green Goblin after using a performance-enhancing chemical vapor that grants him super strength, but also makes him mentally unstable and dangerously psychotic.

It has a Licensed Game in the form of Spider-Man: The Movie.

Followed by Spider-Man 2 and Spider-Man 3. Tobey Maguire and Willem Dafoe reprise their roles as Spider-Man and the Green Goblin in Spider-Man: No Way Home.

open/close all folders
A-K
L-Z
Advertisement:
"Whatever life holds in store for me, I will never forget these words, 'With great power, comes great responsiblity.' This is my gift. My curse. Who am I? I'm Spider-Man."
Feedback

"You're an amazing creature, Spider-Man. You and I are not so different."

Example of:
"Not So Different" Remark

"You're an amazing creature, Spider-Man. You and I are not so different."