Film / Interview with the Vampire 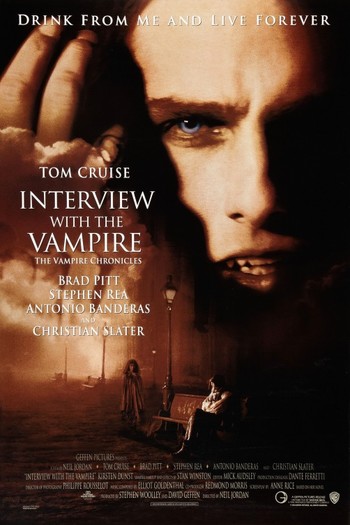 "Drink from me and live forever..."
Advertisement:

A 1994 period horror film, based on the 1976 novel of the same name by Anne Rice, the first in her The Vampire Chronicles series. The film was directed by Neil Jordan, and stars Tom Cruise, Brad Pitt, Antonio Banderas, Christian Slater, and Kirsten Dunst. It received a stand-alone sequel of sorts in the 2002 film, Queen of the Damned, though it plays quite a bit looser with the source material.

The movie's framing story centers on a newspaper reporter named Daniel Molloy (Slater), interviewing a man named Louis (Pitt) who claims to be a vampire. Molloy is unconvinced of Louis's claim until his subject displays feats of inhuman speed. He agrees to interview Louis, who then relates his previous life as a New Orleans aristocrat, and subsequent unlife as a vampire, turned by Lestat (Cruise).

Although Lestat teaches his pupil the ways of vampires and how to hunt mortals for their blood, at first Louis resists his vampire urges, preferring to prey on rats and other animals rather than biting humans, but finally succumbs to his appetites, biting and killing his housemaid. Afterwards, Louis attempts to kill himself by burning down his estate, but Lestat drags him out and they escape to New Orleans, renting an apartment together.

While Louis continues to be wracked with guilt at his own urges, Lestat has embraced his nature, even taunting Louis by turning a young child named Claudia (Dunst) into a vampire so Louis will never leave him. Like any great domestic drama, things only get worse from here...

I am going to give you the tropes I never had: