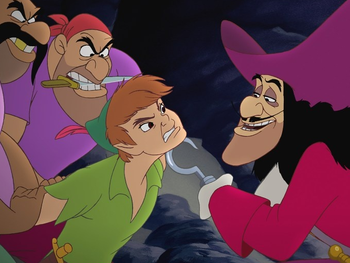 Why Peter Pan, how unexpected of you to show up. And by unexpected, I mean totally expected.
Advertisement:

A villain has the Damsel in Distress or Distressed Dude at his mercy and wants to intimidate, humiliate, or otherwise subjugate his prisoner. One way to do this is to grab the chin or jaw of a captive and force them to look the villain in the eye whilst he gloats or threatens them. This could happen with a demoralised captive who is looking at the ground, a captive who is distracted by something and the villain wants to be the object of attention, or a captive actively avoiding looking the villain in the eye due to the villain's powers. Less commonly happens with a Defiant Captive, who is probably already making eye-contact with the villain.

In most cultures, the face is considered one of the more intimate parts of the body, and face touching is usually reserved for friends and family. A villain touching someone's face would therefore be considered a violation of personal space, and an easy way of showing they have a high degree of control over their captives.

Can be paired with I Have You Now, My Pretty, and related tropes, though this trope does not have to be sexual in nature, and can be employed by a villain simply to mock/intimidate the hero.

Compare Neck Lift, Angry Collar Grab, and Face Palm Of Doom (where the face grab is intended to be painful). Also compare Enemy Eats Your Lunch and Terms of Endangerment, another ways of asserting dominance through social boundary-crossing.