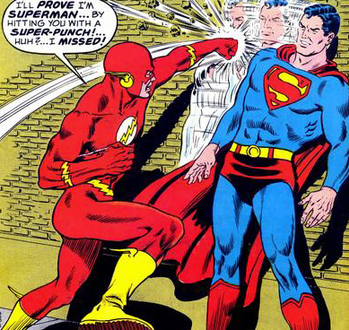 ...so who would win a race?note Actually...note Wait, so Flash is fighting Superman because he thinks he is Superman?
"Must work... on powers of... stopping!"
— Linda Lee, Supergirl: Cosmic Adventures in the 8th Grade
Advertisement:

One of the Stock Superpowers; a person with Super Reflexes can react to situations faster than normal. This is typically used to allow him to dodge or cancel threats that would otherwise blindside a regular character.

Unlike Spider-Sense, there is normally no psychic component to this ability — rather, the character with Super Reflexes acquired the skill through training, Applied Phlebotinum, technological enhancement, or just dumb luck. An implied limitation is that a character with Super Reflexes must first notice the danger before he can (quickly) react to it, so some element of Super Senses is implied. Whether or not this is enforced depends on the quality of the work.

Super Reflexes is often a Required Secondary Power for Super Speed, but the two are not equivalent; just because a character can dodge a flurry of lightning-fast fists doesn't mean he can run halfway across a field in the blink of an eye. Expect this power to be revoked the moment it becomes inconvenient for the plot; witness The Flash being able to clean an entire house in a tenth of a second one page and slam into a villain's outstretched arm on the next.

In non-superhero settings, Super Reflexes may be called other names like "Combat Reflexes" or "Heightened Response".

Bullet Time is a visual effect often used to depict this trope.

Compare and contrast with Super Speed and Spider-Sense. May overlap with Dodge the Bullet.

Dracula's enhanced speed and reflexes make him ideal when faced with traps.

Dracula's enhanced speed and reflexes make him ideal when faced with traps.