Sharpened to a Single Atom 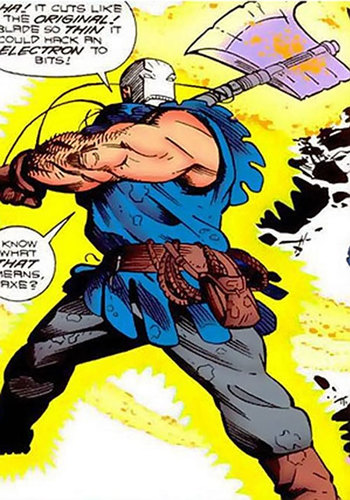 That someone flunked physics?
"The edges of the Shikra blade have been honed to the thickness of a single atom. I must keep my hand very still, for fear that one slip will cut you... in half."
— Qetesh, Stargate: Continuum
Advertisement:

Weapons that have been sharpened to a single atom are a particular type of Absurdly Sharp Blade that are so sharp, their cutting edge can be measured in terms of atoms or molecules, often being just a single molecule wide. This usually gives the weapons Absurd Cutting Power, but generally requires the blade to be made out of some sort of Unobtanium to maintain that sharpness without dulling instantly (or just shattering into a million pieces) the first time it's used. For these reasons, the trope is most frequently encountered in Science Fiction settings.

A common term used for this is "monomolecular". Most often seen with knives or swords, but occurs from time to time with Razor Floss, too. This can be particularly troublesome, as monomolecular wire is usually functionally invisible, and walking into one can slice through vital bits without being immediately noticed.

A weapon is only an example of this trope when a specific (very small) width is given for the blade's edge; if no specific measurement is given, then it's just an Absurdly Sharp Blade.