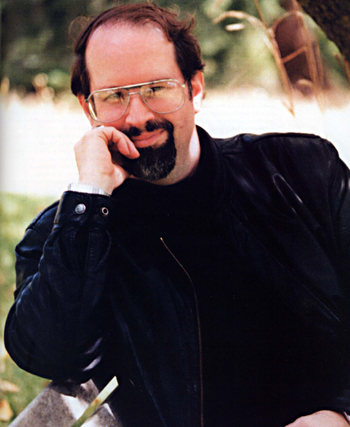 Timothy Zahn (born September 1, 1951) is a Science Fiction, Fantasy and Space Opera author, best known for writing The Thrawn Trilogy, one of the founding contributions to the old Star Wars Expanded Universe (now Star Wars Legends). Among fans, he's often considered to be among the best, if not the best, of the Star Wars authors. There are a number of factors involved in that, including his respect for Imperial characters as multidimensional beings, his ability to write immensely complicated and detailed plots, the fact that he reads and uses the other books in the EU, and his habit of foreshadowing things that will be revisited years later in different books.
Advertisement:

In the Thrawn trilogy, he justified or filled in almost all of the original three movies' Technobabble, Loose Ends, Hand Waves, and Plot Holes, resulting in a consistent universe with coherent rules. Notably, the Thrawn trilogy also named Coruscant. Years later, he wrote the Hand of Thrawn duology, renowned for fixing a lot of odd details that had appeared in subsequent novels, pairing up Mara Jade and Luke Skywalker, and having the New Republic finally sign a peace treaty with the Imperial Remnant.

Zahn has written a number of short stories, two of them in collaboration with Michael Stackpole of the X-Wing Series. The two authors seem to get along pretty well, and while Zahn freely involves characters introduced by other authors, he uses Stackpole's characters more specifically—all of the Rogues have at least one line, though most of them aren't directly named. He and Stackpole also wrote The Reenlistment of Baron Fel but, agonizingly, this hasn't been published.

And when the fandom takes an author and promotes him as the example of how to fix messes made by other authors, you know he's good.

In the final years of the Legends canon, a lot of his characters were killed off unceremoniously. Reputedly, he knows that although he created them he doesn't have a say in how they die, but he's still a bit annoyed that none of the authors doing so bothered contacting him. However, with Disney's acquisition of the Star Wars franchise and the development of Star Wars: Rebels, his most iconic character Grand Admiral Thrawn has been inducted into the "official" canon, with Zahn himself not only approving of his character's true-to-form interpretation but also writing a new Thrawn novel released in April 2017. One wonders how many more of Timothy Zahn's concepts will be introduced alongside Thrawn, but it would be safe to leave that with those who indulge in Wild Mass Guessing. He also did some development work on the ancient Chiss for Star Wars: The Old Republic.

No relation to actor and comedian Steve Zahn.

He's also written several short stories set in the Honor Harrington setting, and is co-author, with David Weber, of the Manticore Ascendant prequel trilogy about the early days of the Royal Manticoran Navy. The introductory short story, "A Call to Arms", was published in the Beginnings anthology.

Tropes in Timothy Zahn's work (only include if they appear in at least two of his works, or if the work doesn't have its own page):