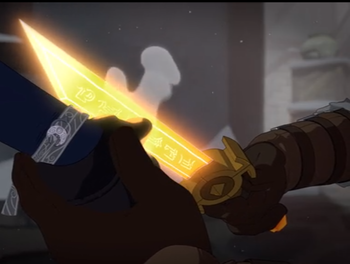 Like a hot knife through enchanted assassin bindings.
"Do you see this [knife]? This toasts bread while you're slicing it."
— Trillian, The Hitchhiker's Guide to the Galaxy
Advertisement:

A hot blade is an edged weapon that somehow heats up, adding the thermal energy of its temperature to the kinetic energy of its blow to achieve Absurd Cutting Power. When active, it will usually glow visibly (without losing any of its structural integrity, somehow explanation Steel-based blades will have any heat treatment ruined after exposure to such heated-blade usage, and if you get it glowing hot it will also become malleable and easily deformed, as any blacksmith knows. You could use some kind of material that can withstand the temperatures the intended heat blade will reach, such as a tungsten alloy or ceramic, but there will be tradeoffs based on the strengths and weaknesses of the chosen material.) because Power Glows.

Compare Vibroweapon, which uses extremely rapid vibrations instead of heat to enhance its cutting power. A more advanced weapon is the Laser Blade, where the blade is made of Pure Energy instead of just adding (heat) energy to a physical blade. Hot blades are more common in a Science Fiction setting. Its more fantasy-oriented counterpart is the Flaming Sword; a hot blade retains a touch of Playing with Fire while requiring less Willing Suspension of Disbelief.

Usually used with swords, but other bladed weapons are also seen occasionally. A subtrope of Absurd Cutting Power.