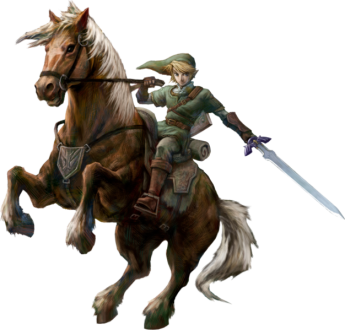 Hi-ho, Epona! AWAY!
Isn't there a white knight upon a fiery steed?
Late at night I toss and I turn
And I dream of what I need!
I need a hero!
— Bonnie Tyler, "Holding Out for a Hero"
Advertisement:

Combine a Rearing Horse, a Big Damn Heroes rescue, some Cool Guns or a sword, a pinch of Dramatic Wind, and you get Horseback Heroism. The sight of "Lightning" rising up on his hind legs while thunder cracks in the background is enough to tell everyone involved that the Day is well and truly Saved.

This is an old trope, though this hero is by no means riding a "dead horse" when he uses it to rescue friends or lovers. It's just that awesome.

Updated versions may substitute a Cool Bike or Cool Car for the horse. In which case you can expect My Horse Is a Motorbike.

Not to be confused with The Cavalry, who only sometimes ride literal horses.