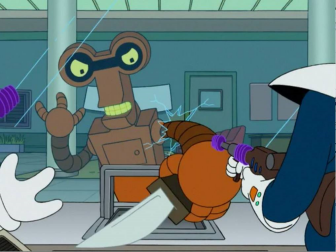 He's not crazy! He's just not user-friendly!!
"Definition: Love is making a shot to the knees of a target 300 kilometres away using an Aratech sniper rifle with a tri-light scope."
— HK-47, Knights of the Old Republic II: The Sith Lords
Advertisement:

A psychopath who's also a robot. Compare A.I. Is a Crapshoot where the robot isn't intended to be evil. Expect it to be a Murderous Malfunctioning Machine. If they happen to be a good guy (or at least working as good guys' Robot Buddy), they'll probably be a Sociopathic Hero. Needless to say, this AI unambiguously possesses sapience as much as organic beings.

See "Second Law" My Ass! for a milder form of this behavior.