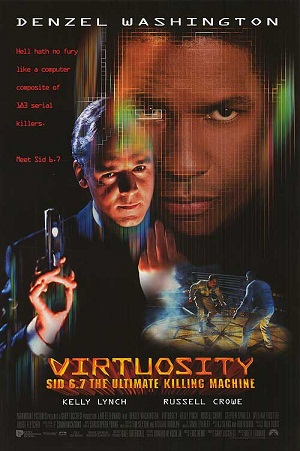 Virtuosity is a 1995 science fiction film directed by Brett Leonard. The movie tells of a new virtual reality training program for cops. SID 6.7 (Aussie import Russell Crowe), the villain program in charge of the sim, is mothballed after causing a brain overload in one of the playtesters, but the lead scientist Dr. Darrel Lindenmeyer (Stephen Spinella) refuses to quit. In revenge, he transplants SID into an android body and sets him loose in Los Angeles.

Parker Barnes (Denzel Washington), an ex-LAPD officer and one of the surviving testers, is reinstated in order to stop SID before he embarrasses the hell out of everyone. SID was created as an amalgam of hundreds of real-life murderers, including Adolf Hitler and Saddam Hussein. But one of the ghost personalities in SID was also responsible for killing Barnes' wife, which adds spice to their deadly game.

The film was shot in and around Los Angeles.