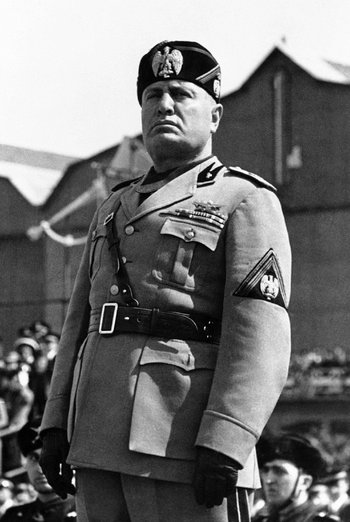 Il Douche.
"Fascism is a religion. The twentieth century will be known in history as the century of Fascism."
Advertisement:

Benito Amilcare Andrea Mussolini (29 July 1883 — 28 April 1945) was an Italian fascist politician who was leader of Italy from 1922, pretty much up to his death. Unlike his German contemporary Adolf Hitler, he was never in official command of his nation due to King Victor Emmanuel III nominally being his boss.

Mussolini first got the idea for fascism when he was a war reporter in the trenches of World War I, following around the soldiers (and later becoming one). And he liked what he saw in the army: he wanted to create a society organized like a military battalion, rigidly conformist, with no dissenters to undermine patriotic values.

Today, he is most famous for being the first fascist ruler of any country, and for his colonial war against Ethiopia in 1935 (called Abyssinia at the time) which proved the ridiculous incompetence of the League of Nations. As Italy became diplomatically isolated due to that war, he became a close ally of Adolf Hitler and fought on Nazi Germany's side during World War II, although the Italians were more of a hindrance to Germans than a helpnote This was mostly due to logistical problems and political instability. The Italian Navy actually gave the British a run for their money in the Mediterranean—much more than Hitler's fleet could claim U-Boote notwithstanding—and Italians who fought alongside Rommel's Afrikakorps were quite effective in combat when competently led. On the downside, their issued small arms were mostly inferior to what everyone else carried and their tanks were outdated. As for logistics, suffice it to say that the long European tradition of joking about "Italian efficiency" didn’t just come out of nowhere. To be fair, when Hitler wanted Italy to enter the war, Mussolini said what amounted to "can it wait until I've industrialized my country in five years?" (this may have been a random number chosen to delay Italian entry indefinitely... until Germany annexed half the continent with ease, at least). Italy simply wasn't ready for war, and Mussolini knew it.

That all said, there is a real historiographical debate about how much of a Fascist Mussolini really was — as the most notable members of his cabinet consisted of political opportunists rather than die-hard Fascist fanatics — and Mussolini himself seemed to waver a lot when asked how far the Fascist revolution was intended to go. On at least one occasion, he even said that Italy was not ready to be Fascist. In other words, he seemed to believe in Fascism, but was too cynical about Italy and politics in general to believe that a Fascist revolution could take place and thus was content to run a straight-up dictatorship with Fascist dressing, electing to maintain his position rather than upsetting the status quo. Although Mussolini ruled for more than 20 years, several parts of Italy barely noticed any change from the previous fifty.

Thus, Fascist Italy was not as totalitarian as Nazi Germany or Stalinist Russia — although a one-party state with media controlled and opposition banned, there was little effort at controlling the thought or actions of Italian citizens as extensively as in those dictatorships (outward displays of loyalty were generally sufficient). It remained a de jure monarchy and was heavily influenced by the Catholic Church (though ironically Mussolini was virulently anti-theist atheist and held Christianity in contempt over all other religions), with whom the Fascists maintained a complex relationship.

Further, Mussolini's regime rarely executed citizens for political reasons - in fact, only 9 people were executed from 1931 to 1940 (most for non-political offenses), with an additional 17 by Italy's defection to the Allies in 1943. Political opponents were more often jailed for a few years, then amnestied; nor did the Fascist Party ever experience a purge equivalent to Stalin's Great Terror or Hitler's Night of the Long Knives. That said, fascist Italy wasn't completely free of violence, with historians estimating at least 3,000 Italians died under Mussolini's government. Blackshirt squadristi often terrorized dissidents by destroying their homes, beating them (sometimes forcing them to drink castor oil), or less frequently assassinating them. The murder of socialist parliamentary leader Giacomo Matteotti in June 1924 by a fascist hit squad is the most notorious example, though it's still debated whether Mussolini personally ordered his death.

During the interwar years, Italy was well known for its aggressive foreign policy: aside from conquering Ethiopia (Abyssinia) and participating in World War II, the Fascists also entered the Spanish Civil War (on the side of Francisco Franco), severely oppressed their colonies in Libya and Somalia, attacked the Greek island of Corfu to force diplomatic concessions, and invaded Albania as a show of power following Hitler's annexation of Czechoslovakia. Mussolini was reluctant to enter the war, only declaring war on Britain and France in June 1940 once the fall of France was imminent. The generally lackluster performance of Italian arms, particularly their defeats in North Africa and Greece, severely weakened Mussolini's government; few Italians saw the war as necessary or justified, while the Allies came to see Italy as the weak link in the Axis.

Soon after the British and Americans began their invasion of Italy, Mussolini was deposed by King Victor Emmanuel III following a de facto vote of no confidence in the Grand Council of Fascism on 25 July 1943. In September the Italians joined the Allies and declared war on Germany. The Germans responded by invading Italy and forcing Mussolini, by now wanting to retire, to form a Nazi state called the Italian Social Republic in Northern Italy. He "ruled" there for about 18 months, being little more than a puppet ruler under the protection of his German liberators, something he was ruefully aware of. In April 1945, allied troops were rapidly advancing into northern Italy and the collapse of the Social Republic was imminent. Mussolini, along with his mistress, Clara Petacci, and a small group of high ranking politicians and other leaders from the Social Republic, tried to flee to Switzerland in the confusion, but on 27 April, they were both caught by members of the Italian resistance. The next day, perhaps coincidentally two days before Hitler committed suicide, Mussolini and all of his travel companions were summarily executed; they shot him in the gut first, dragged him and his compatriots' bodies into the nearby city of Milan (incidentally, where his movement began) and then hung them upside-down at a gas station (symbolically an act of revenge as Axis forces had executed many resistance fighters in the very same spot), while crowds of angry Italians would spit and throw things (trash, bricks, other unpleasant things) at the bodies.

Mussolini was afterwards buried in an unmarked grave north of Milan, but even in death the dictator managed to cause a bit of a stir, as his body was stolen during the Easter of 1946 by a group of neo-fascists, which presented itself as quite a concern for the new democratic Italian state. Upon recovering the remains of the body, the Italian government held onto Mussolini's bones for ten years, out of concern for a repeat of the theft, before they finally allowed them to be re-interred in a crypt at Predappio in Romagna, his birthplace.

Once reviled as one of the architects of World War II, on par with Hitler, Mussolini slowly stepped out of the spotlight in the last few decades as more historians began arguing that his reign, at least as far as internal politics go, was no worse than that of most of Europe's dictatorships of the era, partially because of the extreme reluctance of Italian fascists to implement capital punishment; throughout the Italian Fascists' 21-year long rule, no more than twenty-three people were reported to have been executed by the state, and most of them were common criminals. Over time, Mussolini was also given credit for his refusal to deport Italy's Jews to the German camps, despite his own discriminatory Racial Laws against them (this was likely because, in line with dominant social feelings in Italy, Mussolini considered Italy's Romani population the primary troublesome minority, and had them all imprisoned). For this and other reasons, Mussolini no longer gets quite as much posthumous attention as Hitler, despite being a significant influence on the development of Nazism. Though if one considers his foreign policies where he used chemical weapons and invaded nations for no justifiable reason he is still a horrid figure of history, just not as horrific as Hitler or Tojo.

Works in which Benito Mussolini appears or is cited include: