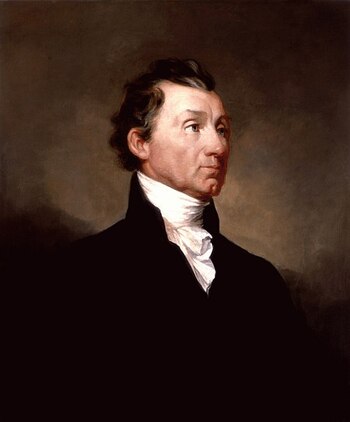 "The best form of government is that which is most likely to prevent the greatest sum of evil."
"My name is Monroe. James Monroe. And here's a taste of the Monroe Doctrine."
—The Critic
Advertisement:

James Monroe (April 28, 1758 – July 4, 1831) was the fifth president of the United States, serving from 1817 to 1825, immediately after James Madison and before John Quincy Adams, and was the last of the Founding Father presidents. The third president from the Democratic-Republican Party. Before becoming president, Monroe fought in the Revolutionary War and later opposed ratification of the Constitution because of the powers it gave to the federal government (he later changed his mind). Then enjoyed a prosperous career as a statesman, holding several positions, including representing his native Virginia in the Senate, being its governor twice, the American ambassador to France and, later, to Great Britain, and both James Madison's Secretary of State AND Secretary of War during the War of 1812.

His eight years in office are known as the "Era of Good Feelings" because, despite the number of important issues affecting the nation at the time, a wave of nationalism and unity swept the nation following the War of 1812 and the different political parties were on very good terms with each other. To help bring the nation together, Monroe went on a well-received national tour. The Panic of 1819 started during his first term, becoming one of the first serious economic crises in American history, though it ended less than five years later and the economy continued to expand. The Erie Canal began construction mere months into his presidency, and ended mere months after he left office. Monroe signed the Land Act of 1820, which lowered the price of acres in the West and played a pivotal role in increasing the population west of the Appalachian Mountains. During his presidency, five states were admitted to the Union (Mississippi, Illinois, Alabama, Maine, and Missouri; more on those last two later), and Florida was bought from Spain after a complicated matter involving Native American tribes along the Florida border and attacks on said tribes by General Andrew Jackson. Basically, Monroe ordered Jackson to stop the Seminole tribe from Spanish Florida from attacking American soil, but Jackson went a step further and invaded Florida, angering the Spanish. Monroe wanted to avoid war, but demanded that Spain either stop the raids themselves or give Florida to the United States. Spain chose to sell Florida, largely because it was busy fighting to keep its Latin American colonies.note Technically, Spain did not sell Florida, but rather ceded it to the United States in exchange for the federal government assuming debts owed by the Spanish Crown to U.S. citizens.

Speaking of that, Monroe is probably most well-known for proclaiming what is now known as the Monroe Doctrine, which was actually written by his Secretary of State (and future President) John Quincy Adams, in 1823. For most of the previous decade, the European colonies in Latin America took up the United States' example and started to fight for their independence. By 1823, all of Latin America except Honduras, the Guianas, Uruguay, and most of the Caribbean colonies had successfully freed themselves from European control. The United States was the first nation to recognize these countries and establish diplomatic relations, and Monroe proclaimed before Congress that the United States would oppose European interference in the affairs of these newly freed countries. (Meaning that, if any meddling needed done in the Western Hemisphere, the U.S. alone would do it.) The policy, named the Monroe Doctrine, at first confused everyone, as the U.S. at the time was a dinky, third-rate power without the resources necessary to enforce the doctrine. However, The British Empire quickly supported Monroe's move and announced that it would back it up with the Royal Navy. (The doctrine of non-interference was beneficial to Britain for trade reasons. Spain had maintained a mercantilist policy with regard to its Latin American colonies, severely limiting their trade with countries other than Spain, and assuring their continued independence meant that they would follow more liberal trade policies, which was good for British merchants.) The importance of Britain's approval to the Monroe Doctrine's success can not be overstated, and their support significantly helped improve relations between the two countries following the War of 1812. This policy would eventually extend to the Soviet Union by virtue of it being in Europe. It should be noted that, as Monroe and Adams intended, the Monroe Doctrine was only meant to prevent the European powers from interfering, not as a way for the United States to dominate the Latin American nations. It would be later presidents, such as Theodore Roosevelt and John F. Kennedy, who would invoke or add to the Monroe Doctrine to carry out their foreign policies.

Monrovia, the present-day capital of Liberia, was named after him. The American Colonization Company colonized the region that is now the capital in 1822 as a haven for freed blacks, and named the settlement after him in 1824. It was argued that they would have more freedom there than they would in the United States. (This was during a time when questions of slavery and emancipation were starting to become major issues in American politics.) This and other similar colonial settlements in the region eventually united as Liberia in 1847, with Monrovia as the capital. Monroe strongly supported the founding of these colonies, believing that it could help quell down the slavery issue. For the record, Monroe owned slaves for much of his life and owned a plantation.

The already-wobbly Federalist Party (the only other significant political party at the time) collapsed by the time of the 1820 election, curiously fielding an official candidate for vice president (Richard Stockton, who'd represented New Jersey in both houses of Congress) but not president, and Monroe basically ran for reelection unopposed, the only president to do so besides George Washington. He still didn't win 100% of the vote. An elector from New Hampshire, William Plumer, cast his vote to John Quincy Adams, who wasn't even running. According to Urban Legend, this was not because of petty partisan politics, but because he felt that Washington deserved the honor of being the only man elected unanimously. That, or he was hinting that Adams could be up next as a potential candidate. In fact, Plumer simply didn't like Monroe's policies.

Monroe was generally more of an administrator than an executive; his main skill was making sure every piece of the federal government was running smoothly and doing its job rather than having to taking direct action himself. It helped that he made generally excellent appointments. He died on Independence Day 1831 (the third president in a row to do so, with Jefferson and John Adams dying mere hours apart on the big day in 1826), terribly in debt, largely because he was caring for his ill wife, Elizabeth, who predeceased him by months. Monroe was the last president to wear powdered wigs, and he died before photography was a thing, so he's the last president to have never had a picture taken of him during his lifetime. He was also the last president elected in a year ending in "0" (1820 in this case) who left office alive until Ronald Reagan—164 years later! (And even he had to dodge a literal bullet to make it out of office alive.)

Tropes as appearing in fiction: