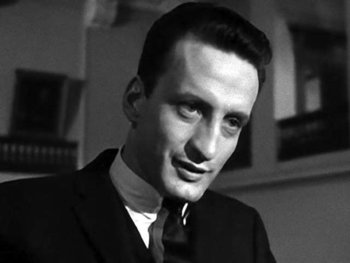 Scott as Claude Dancer, cross-examining a witness in Anatomy of a Murder
"I became an actor to escape my own personality. Acting is the most therapeutic thing in the world... I think all the courage that I may lack personally I have as an actor."
— George C. Scott, quoted in Life magazine, March 8, 1968
Advertisement:

George Campbell Scott (October 18, 1927 – September 22, 1999) was an American actor and director from Virginia, best remembered for his portrayal of General George S. Patton in Patton (1970) and his eccentric aversion to the Academy Awards, for which he was nominated four times in his career. Twice, he rejected the nominations without being successful. The one time he won the Award, for Patton, he famously refused to attend the ceremony. Scott opposed competitive awards on the grounds that every dramatic performance was unique and therefore incomparable to others.

Modern audiences and critics, including Roger Ebert, continue to hold in high regard several of Scott's performances. He is frequently counted among the finest actors of all time.

Scott's fame in Hollywood was matched by his renown on the stage, where he was prolific not only as an actor but also as a director. He received five Tony nominations over a span of 38 years for his performances in Comes a Day (1958), The Andersonville Trial (1959), Uncle Vanya (1974), Death of a Salesman (1975), and Inherit the Wind (1996). He also directed the 1970 TV adaptation of The Andersonville Trial, which won three Primetime Emmy Awards.

However, Scott failed to make a mark as a film director: neither Rage (1971) nor The Savage is Loose (1974) was well received. Also overlooked today is his performance as social worker Neil Brock in the avant garde 1963–64 TV drama East Side/West Side, which was one of the first series to feature a regular black cast member.

Tropes commonly used in his roles