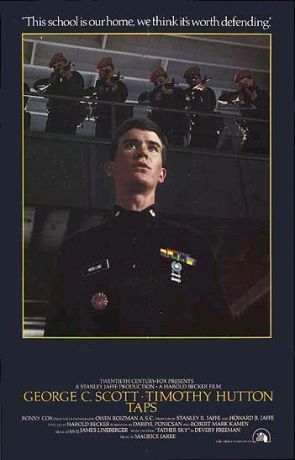 "Never be ashamed of being human, Mr Moreland. Without humanity, a leader becomes a tyrant."
— General Bache
Advertisement:

Taps is a 1981 film, directed by Harold Becker and starring George C. Scott, Timothy Hutton, Ronny Cox, Sean Penn, and Tom Cruise. The story revolves around young military cadets who take over their academy in order to prevent it from being closed and sold to real estate developers. It is based on the novel Father Sky by Devery Freeman.

It was the second screen appearance for Cruise (and his first major role after a brief appearance in Endless Love), and the first non-TV movie for Penn. Hutton had already burst into the acting scene with his Academy Award-winning performance in Ordinary People.

These Tropes are beautiful, man ! Beautiful :

- What in God's name did they teach you in here? What did they turn you into?
- A TROPER, which is the only thing I ever wanted to be !