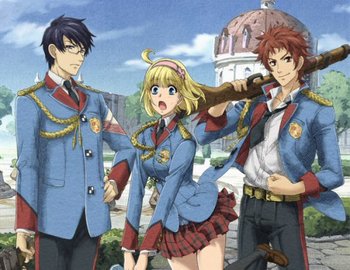 Essentially, the school where a military officer learns his or her trade, that of leading enlisted servicemembers into combat. In fiction, these academies are popular for their ability to combine various School Tropes with Military and Warfare Tropes and allow for use of the various plots and characters that come with both settings.

Often within a military service, there is some tension and/or friendly rivalry between graduates of each type. Traditional academy alumni might be elitist "Ring Knockers" who look down on "13-Week Wonder" Officer Candidate School graduates, whereas those OCS grads who were formerly enlisted servicemembers might disdain all those who became officers "the easy way" without getting experience serving in the ranks first.

This should not be confused with Basic Training or Boot Camp, which is a crash course for turning civilians into enlisted soldiers. Basic Training is aimed at the lowest common denominator and is intended to teach the most basic military skills; typically they take a few months to complete at most, whereas a military academy typically takes several months or years to create a new officer. (Not that it always helps them succeed right away!) Compare with Military School, which is a military institutional environment for junior high and high school students that typically does not graduate its students directly into the military. Also compare Space Cadet Academy, which is a Military Academy IN SPACE!.