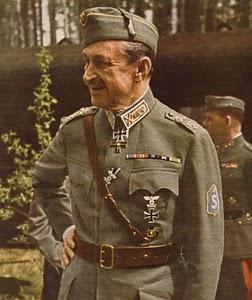 Don't let the Iron Cross fool you — they took on Hans and Ivan, and survived.
"Scarcely had he moved his eyelids,
Ere the pygmy, full unfolding,
Quick becomes a mighty giant."
— The Kalevala, Poem 2
Advertisement:

Finland's history as a sovereign state and people is surprisingly short for such an ancient country and people. Although the Finns were too much for the actual Vikings to swallow, it became a target for the expanding Catholic Church, and was subjected to several Christian Swedish attempts at conquest, culminating in the Second Swedish Crusade in 1249, when the Swedes conquered the populous southern areas. Over the following half a millennium, the Swedish kings expanded their control eastward, taking control of nearly all the Finnish tribes. During this time, Finland became an integral part of the Kingdom of Sweden, and its most hospitable territory was heavily settled by Swedes, whose descendants remain a large minority in Finland today (the reverse also being true in Sweden). As a part of Sweden, it was a critical base of operations and source of manpower for the expansionary Vasa kings of Sweden, who waged many wars in Germany, Poland and Russia and established a considerable empire along the southern Baltic coast.

Sweden lost most of these territories during the 17th and 18th centuries, mostly in the last Great Northern War. Finland was the last to fall, which it finally did, to the Russians, in 1809. Russia actually had little interest in Finland, except potentially as a buffer against Sweden, but was compelled to declare war on Sweden due to a series of military treaties leading back to Napoléon. Consequently, Finland was accorded a great deal of autonomy, becoming only a Grand Duchy in 'personal union' with Russia, as opposed to an integral part of it. Following the annexation, Tsar Alexander I declared that "Finland had been raised to the status of a nation among nations." However, even during this relatively free period, the native Finns had little political or economic power. The Swedish-speaking elite remained the ruling class, but they began building a unified national identity regardless of origin or mother tongue: "Swedes we are not, Russians we do not want to become, let us therefore be Finns."* Modern Swedish makes a distinction here with terms: finländare refers to any person from Finland, while finne is one with a fully Finnish-speaking background.

Near the end of the Russian Empire, rising Russian nationalism led the Tsars to take direct control of Finland, and enacted a series of highly unpopular Russification attempts. These measures enraged the Finns, which led to a long civil war that became part of both World War I and the Russian Civil War, with different factions supporting all three sides: the Russian Empire, the German Empire, and later the Russian Socialist Federative Republic. When the Russian Civil War broke out, Finland ceased all pretensions to being part of Russia and declared its independence in December 1917. This exacerbated the aforementioned bloody civil war, though obviously the Russian Empire loyalists faded into irrelevance.

The Whites supported an 'independent' Finnish kingdom under a German king (and therefore unquestionably in the German sphere, if not an outright puppet state) and the Reds supported a left-wing republic to be either an ally, or federated part of, the emerging Soviet Union. Since the Germans had smashed the Russian Empire in World War I, and actually occupied most of Poland, Ukraine, and the Baltic States, they were in a position to militarily aid the Whites. The Russian communists, too caught up fighting their own Whites and indeed the Germans themselves, were unable to aid the Reds. As a result, the Finnish Whites won, but the monarchy they hoped for was stillborn as a result of Germany's defeat by the Western Allies, withdrawal from the east, and its own revolution (which was put down). Finland therefore became a republic with a right-leaning parliament and president elected in 1919. The new government was accommodating with the Reds, however, and wounds from the civil war largely* But not entirely; the war remains a sore topic among some families on both sides up to this day. healed in the face of rising interwar prosperity and generally good government.

As the Soviet Union expanded into the Baltic States and Poland in the end of the 1930s* The Winter War is often taught in isolation from this expansion, particularly by USSR apologists trying to cast the war as a result of Finnish aggression, rather than part of the Soviet policy of pushing back its Western borders in preparation for the war with Germany., Finland, under the guise of its policy of neutrality and in international cooperation, made overtures to Weimar and, later, Nazi Germany. Lapuan liike ("Lapua Movement"), a radical-right anti-communist organization was formed, and proceeded to harrass and intimidate members of left-wing parties. As a result of rising political violence, the Finnish government banned the Communist Party and suffered a coup attempt, the Mäntsälä rebellion, in 1932. But the Lapuans themselves went too far by kidnapping ex-President K. J. Ståhlberg. In turn, popular opinion turned against the radical right after the Mäntsälä rebellion, which was seen as a violent coup attempt against the legitimate democratic regime, and Lapuan liike itself was banned.

The Soviet Union, worried by the rise of fascism in Europe, feared an attack by Germany through Finland. As a result, the Soviets pursued an aggressive foreign policy against the Finns, attempting to force the cession of densely populated, industrialized, and economically prosperous lands close to the former Russian capital of St. Petersburg (then renamed Leningrad), offering relatively paltry territories in exchange. Soviet diplomatic attempts failed, and after Nazi Germany and the Soviet Union signed the Molotov-Ribbertrop Pact, dividing Eastern Europe between the two, the decision was made to preemptively conquer Finland militarily.

Thus began Finland's participation in the Second World War with the Soviet invasion of the country in late 1939. This conflict became known as the Winter War, and it lasted only about three months. When a world power attacks a sparsely populated, largely agrarian backwood, the only realistic possibility is a Curb-Stomp Battle. The Finns, however, didn't get that particular memo, and shocked the world by stoutly resisting the invasion, despite being badly outnumbered and hilariously short on armored vehicles and aircraft, and won several major battles, humiliating the Soviets and exposing massive weaknesses in their military, brought on by the Great Purges of the 1930s. The Soviets has also expected that the recent bitter civil war between Whites and Reds would result in the Finnish Reds turning against the Finnish government and joining forces with the Communist invaders, but this never happened. Despite early Finnish success, the Soviets rather quickly adapted, and their massive advantages began to tell, making it obvious to the Finnish leadership that further resistance amounted to national suicide. They managed to negotiate peace, ceding to the Soviets more land than what was demanded in the pre-war negotiations, but preserving Finland's independence. One Soviet general is reputed to have quipped that the land obtained was only enough to bury all the Soviet corpses.

Despite this, Finns rightly still consider the Winter War their finest hour, a storm-tossed people playing David to the Soviet Goliath, inflicting massive casualties with their highly motivated (though small, poorly equipped and barely trained) armed forces, ingenuity, and their complete and total mastery of Finland's unforgiving geography (notably, the titular forests). However, due to the sheer size of the Soviet state and its Red Army, 320,000 casualties, while severe, wasn't anything they couldn't absorb (the Soviets suffered roughly the same number of casualties in one week at Kursk in the Ukraine just three years later). The Russians, though, learned well from the mistakes of the Great Purge (which resulted in the death of virtually every experienced senior officer in the Soviet Union), and the experience obtained in the Winter War was critical to Soviet victory on the Eastern Front against the Nazis. This mess remains an eminently teachable lesson in force multipliers and the disconnect between theoretical force and actual combat capability.

Peace proved to be fleeting and Finland was drawn back into the war, on the Axis side, when the Nazis invaded Russia in 1941. Finland attempted to reclaim, with German assistance, the territories lost to the Soviets (if not a little beyond the former borders), and may have also feared a resumed Soviet invasion. They called this phase of the war the Continuation War, in which Finland was not formally part of the Axis, but was a so-called 'co-belligerent.' The campaign initially saw good progress, and Finland even began to resettle the territory with the residents who had been evacuated a couple of years prior.

However, upon seeing the hopeless situation of Germany and the Axis by late summer of 1944, the Finns negotiated an armistice with the Soviets. This forced them to return all occupied territory once more to the Soviet Union and to expel the German troops based on their soil. The process was initially bloodless, since the Finns still sympathized with the Germans, and gave them notice and time to retreat to Occupied Norway in good order. The friendly-ish situation ended due to Soviet pressure, leading to a few small skirmishes and the complete razing of buildings and infrastructure in northern Finland by the retreating Germans. The local civilian population had fortunately been evacuated well in advance. This last phase of the war in Finland, called the Lapland War, finally ended in April 1945. Finland acquired the distinction of being the only participant of the Second World War to fight both Nazi Germany and Soviet Russia, as well as avoid enemy occupation during the entirety of the war.

Despite the perhaps distastefully-pragmatic backroom politicking, World War II is widely considered Finland's greatest moment (except by those who simply consider it a tragedy, or an example of fascist imperialism). It's seen as having unified the Finnish nation, though in truth the Finnish government never mobilized more than half of their reserves as they feared an uprising of Soviet sympathizers.

Because the Soviets were allied with Great Britain, the British were obliged to declare war on Finland during the Continuation War; with one isolated exception, in all those four years there neither state took military action against the other, and no British troops or warships were deployed.* If you don't count the lone failed raid against 4 merchant vessels.

Interestingly, and further highlighting the confused nature of history in this corner of Europe, the British (and the French) actually considered entering the Winter War on Finland's side (since, at that point, the Soviets were allied with the Nazis and generally in poor odor among the Western democracies because of the whole communism thing). This might be why the Soviet Union was willing to accept a negotiated peace at the end, even though they'd just achieved a dominant position and almost certainly would have been able to conquer all of Finland had they kept fighting.

After the World Wars, Finland has been very active in the United Nations and Finnish soldiers have actively served in UN peacekeeping forces. Finland is also one of the last European countries to maintain universal conscription* Universal among males only, although in modern times females may also volunteer. Human rights organizations have condemned this as breaking gender equality, but the system nonetheless has widespread support among Finns., with a majority of the adult male population having undergone some form of military training. Many reservists continue their tours of duty as contract soldiers in UN service. The Finnish Navy participated in the anti-piracy operation Atalanta alongside EU fighting forces.