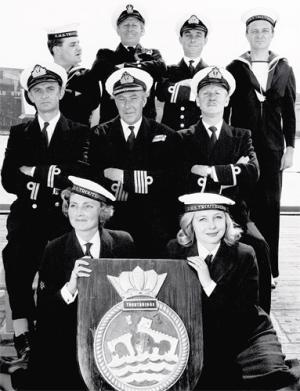 The Royal Navy's finest
"Ladies and Gentlemen, we present... the Navy Lark."
Advertisement:

A radio comedy produced by The BBC which ran from 1959 to 1977 starring Leslie Phillips, Stephen Murray, Jon Pertwee, Richard Caldicott, Ronnie Barker, Heather Chasen, Tenniel Evans and loads of others. The Navy Lark followed the adventures of the Royal Navy's least wanted crew on HMS Troutbridge note A Type 15 Frigate, a take off of the real life H.M.S. Troubridge with whom it shared its pennant number, F09 as scheming Commander (promoted over the course of the series to Commodore) Povey tried to dump them overboard and they tried to avoid life on civvy street. Generally these were interspersed with CPO Pertwee's doomed-to-failure get-rich-quick schemes and Sub-Lieutenant Phillips' equally doomed attempts to chase down WRN Chasen.

CPO Pertwee put in an indent for the following Tropes (which will not end up being sold at his cousin's surplus store in a few days):