Soldiers at the Rear 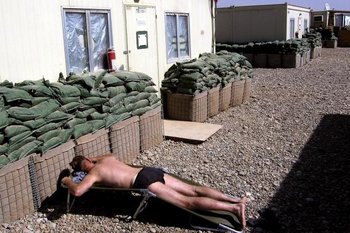 War is Hell
"I made coffee through Desert Storm. I made coffee during Panama, while everyone else got to fight, got to be a Ranger. Now it's 'Grimesy, black, one sugar' or 'Grimesy, got a powdered anywhere?'"
— Specialist Grimes complaining while making coffee, Black Hawk Down

Similar to the Straw Civilian, this trope shows up in Military Fiction. Unlike the civilian or the Draft Dodger, this guy joins the army when things go bad because he knows the safest place to be is in the military, in a position where absolutely nothing can go wrong. While everyone else is out fighting on the distant Planet of Hats, he's safe and sound back in Muskogee, Oklahoma, sewing buttons onto uniforms.

Whereas a civilian might not know any better, being fat and stupid, this guy's actually been through basic training, but he's currently assigned to a unit that's not going into combat anytime soon, if at all. He still gets all the perks of being a soldier (respect, drinks, and a uniform) but none of the hassle (strangers trying to kill you a lot). He's the military version of the fat, lazy cop. In modern military parlance, he's the "Rear Echelon Motherfucker."

Because fiction tends to be black and white, the REMF usually isn't portrayed as someone who got lucky, or as someone doing a superficially dull but vital job, but as someone who kissed a lot of fat, rich behind. A REMF will be someone who pulled some strings themselves or had Daddy call the right people to get a cushy post. He's a Senator's son, or a celebrity, or he's got a lot of money in the bank. It's never luck, or actual skill, it's who he is and who he knows.

The story in Real Life is, naturally, different. The military is a big organization, and a lot of necessary jobs don't involve getting immediately shot at by random [INSERT BAD GUY HERE]s. In fact, in modern armed forces, there's roughly 10-15 REMFs working in support for every soldier actually pulling a trigger at the front. This doesn't mean the REMF isn't resented, mind you, he's still a REMF who isn't deep in the shit at the moment - many frontline grunts won't care and still hold grudges. There is one and precisely one universal exception: Medical personnel. Doctors and nurses may never see direct combat, but rare indeed is the front line grunt who will speak ill of the people who stitch them or their buddies back together if things go wrong. There are also other personnel who are specifically forbidden by regulations to enter combat zones, like Military Chaplains, and you'd figure regular combat troops would understand.

Often, and perhaps against the stereotype, the children of important and/or wealthy people do join the military because they want to serve. Fortunately or unfortunately, the military brass aren't morons and know that if the child of a VIP dies on their watch, they're in for a world of trouble. Thus, through no fault of his or her own, the kid with the silver spoon might spend the war behind a desk somewhere typing up reports. The same thing can apply to celebrities: had Muhammad Ali accepted his conscription during The Vietnam War, he most likely would have been giving exhibition matches to entertain troops, as Joe Louis

did during World War II (though Louis was not drafted).

Along with REMF, "pogue" is a term with similar connotations (from POG: Person Other than Grunt). Fobbit (a portmanteau of "Forward Operating Base" and "Hobbit", given how Hobbits love to stay at home and never go out on adventures) is another similar term, specific to troops deployed but who do not go on patrols for varying reasons. "Wire Hugger", and similar terms have grown from the recent wars in the Middle East (as in, desperately tries to keep close to the base, even if it means hugging barbed wire).

Being a REMF in an unconventional or modern conflict might be almost impossible, since by definition there isn't a rear-echelon once you're in the theatre. Someone whose job normally isn't anywhere near combat might find themselves under fire or IED attack at any time. For soldiers deployed today in places like Iraq, "REMF" generally means personnel stationed in a totally different country such as Kuwait and Qatar.

Arguably, most of the wars the US has fought since World War II could probably have been said to lack a "true" rear, as that was around the time the US Army commissioned the M1 Carbine: to give REMF troops a decent long arm in case the Germans or any other Blitzkrieg-style enemy force suddenly broke through the lines and struck at all the supporting infrasctructure.

If becoming a soldier at the rear is actually because of the individual soldier's actual skills, it is known as getting wise. No wonder becoming the company clerk is one of the favorite tasks amongst the conscripts around the world.

This guy is often Gung Holier Than Thou and a Miles Gloriosus. A bad Officer and a Gentleman and General Failure are both probably REMFs. A good Drill Sergeant Nasty rarely is.

See also: Armchair Military, and Desk Jockey. Also related to Mission Control. The Adminisphere is the civilian equivalent, dealing with the disconnect between workers out on the factory floor and their administrators.